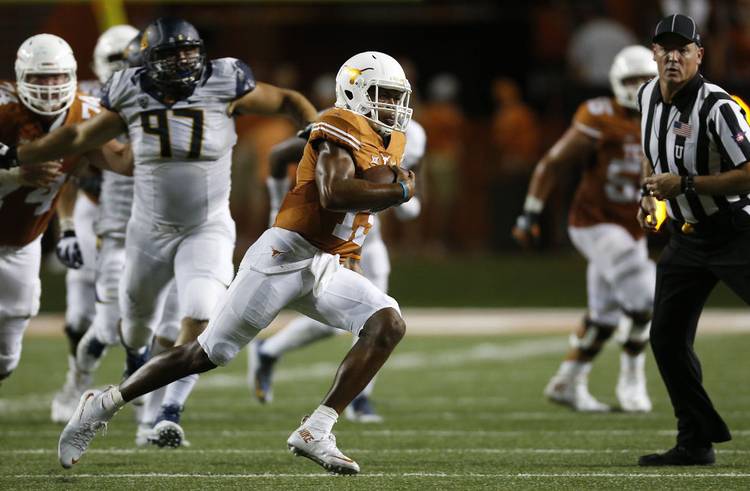 Texas quarterback Jerrod Heard runs for a touchdown to cut the deficit to one late in the fourth quarter against California. RODOLFO GONZALEZ/AMERICAN-STATESMAN

“The quarterback draw was about as beautiful a play I’ve seen in a long time,” the UT play-caller said.

What came afterward wasn’t so great, though. “My heart breaks for Nick Rose, our kicker,” Norvell added.

Rose’s missed extra-point attempt kept the Longhorns from tying things up with 1:11 remaining against the Bears. Texas’ defensive miscues will be dissected in the days leading up to the Big 12 opener against Oklahoma State.

But Saturday’s game was the best offensive showing in the Charlie Strong era. It was one of the best nights in school history, actually.

“I wouldn’t say devastating,” Heard said, when asked about the missed extra-point attempt. “I’m real proud of my team. What we showed is not what a lot of people can do. What we did tonight, it shows that we can win a lot of games.”

Texas came into the game averaging 220 yards the first two weeks. The Horns had the second-worst offense in major college football, based on that yardage total.

Assuming that number held up for an entire season, it would be the worst offensive output in the modern era of Texas football.

Hard to imagine the Longhorns staying down at the bottom of the offensive pile with Heard, though.

“The performance he had tonight, he had almost 200 yards rushing and 300 yards passing,” Norvell said. “We’re very, very excited about him. But we have to do more with our (running) backs. Our receivers have to have more production.

“(Heard) led tonight, he was productive and he never quit. We can definitely build on that.”

For all the questions about Heard’s passing acumen, the redshirt freshmen is proving that he can throw it. Daje Johnson had five catches for 145 yards. Armanti Foreman and John Burt combined for eight catches for 135 yards.

Asked why he felt so confident, Heard said, “It’s just the faith I have in my guys. I know the whole O-line is going to do the blocking and do the hard work. I have faith in those guys to let me sit in the pocket and get the ball distributed to all those good athletes I’ve got.”

Notebook: Texas loses some security at safety position against Cal

A thorny end to Rose’s night, but teammates defend him