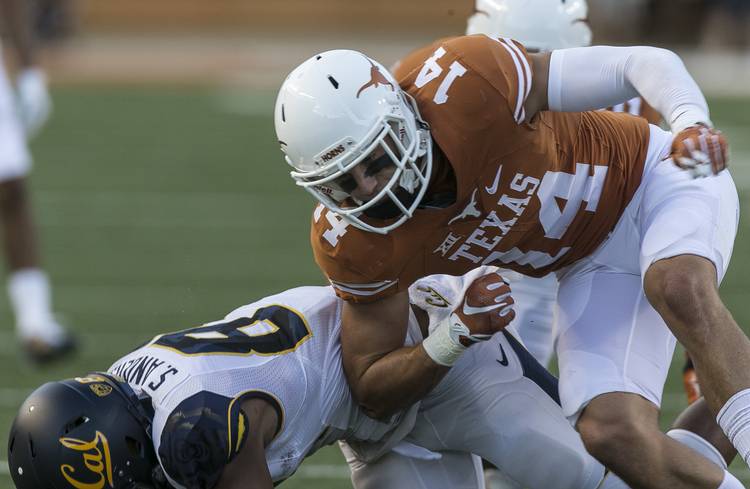 Texas' Dylan Haines, right, was ejected for targeting on this play after hitting California Stephen Anderson after a catch during the first half of the NCAA game held Darrell K Royal -Texas Memorial Stadium in Austin, Tx., on Saturday, (RODOLFO GONZALEZ / AMERICAN-STATESMAN)

What little depth Texas has at safety was put to the test against Cal.

Kevin Vaccaro and P.J. Locke manned the back end of the defense nearly the entire night in Saturday’s 45-44 loss.

Vaccaro entered on Texas’ second defensive drive when Dylan Haines was ejected for targeting. By the end of the quarter, Locke was next to him replacing Jason Hall, who went out with a shoulder injury

Neither Vaccaro, a career special teams contributor, nor Locke, a true freshman, did anything cringe-worthy despite facing a legitimate pocket passer in Cal’s Jared Goff. In fact, Vaccaro’s nine tackles tied Malik Jefferson for a game-high. He was also credited with a forced fumble and a pass breakup.

“We’ve been practicing and getting ready for this moment,” Vaccaro said. “I’m proud of P.J. coming in there being young and doing his job.”

Vaccaro said he spoke with his brother Kenny before the game, and the New Orleans Saints safety told his sibling “to play physical.” Vaccaro made his brother proud during a goal line collision with Khalfani Muhammad that resulted in a first-quarter fumble.

“They played pretty well,” Longhorns coach Charlie Strong said. “The long runs, we probably should have been in better position to go make the play.”

Ejection: Haines was ejected and confined to the locker room after official’s replay showed he led with his helmet to tackle Stephen Anderson.

Anderson was not hurt.

“It’s so early in the game,” he said. “I have a different opinion of it, but he was ejected.”

Away from Daje: Cal had no interest in kicking the ball to Daje Johnson, fearful he might create some electricity like he did the week before when he scored a touchdown against Rice. Goff stayed on the field for every fourth down so that Texas couldn’t substitute its coverage team. Goff punted four times for an average of 33 yards.

Matt Anderson had been given similar instructions on kickoff duty and angled the ball away from Johnson with short kicks and three touchbacks.

“We were looking at Cal’s signals and trying to see what they were doing to try to prevent me from getting the ball,” Johnson said.

Johnson managed to make an impact in the passing game with first quarter receptions of 45 and 54 yards.

He finished with five catches for 145 yards (career high).

Short yards: Linebacker Edwin Freeman purposefully fell between plays to stop Cal from driving in the red zone. Medical staff rushed to Freeman’s aid, but he was fine. … At halftime, the marching band aligned to spell “PRESIDENT FENVES.” On Thursday, Gregory L. Fenves was inaugurated as the new university president. His approval rating rose early in the week when he dismissed controversial athletic director Steve Patterson. … During an interview on the radio broadcast, interim AD Mike Perrin invoked a message Darrell Royal once shared with Mack Brown and said his first line of duty “is to put the BBs back in the box.” … Wide receiver Marcus Johnson (ankle) participated in pregame drills, but did not play. Wide receiver Ty Templin was on crutches and wearing a knee brace. …  This was the first time Texas was an underdog at home against a non-conference opponent since 1996 (Notre Dame). The Longhorns have been underdogs in 14 of their last 25 games. … A troubling thought about Cal’s 280 rushing yards: The Bears did it without Daniel Lasco, an 1,100-yard rusher from last season.