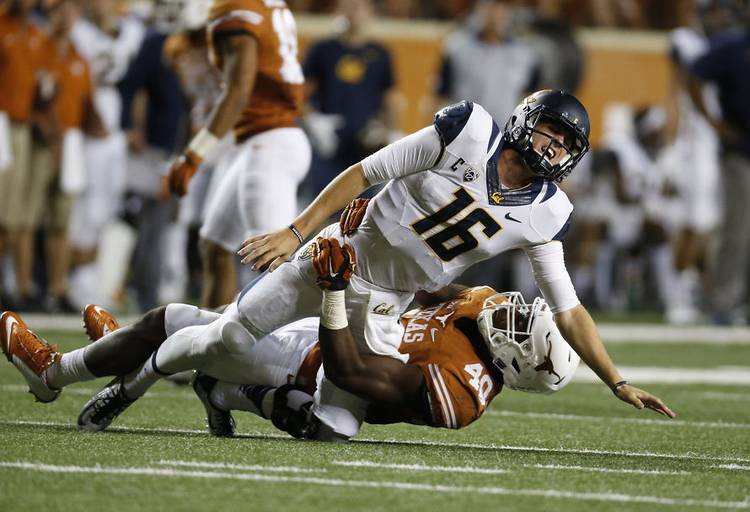 Cal quarterback Jared Goff grimaces as he is tackled by Texas defender Naashon Hughes in the second half. Goff was visibly hobbled but continued to play Sept. 19, 2015 at Royal-Memorial Stadium. JAY JANNER/AMERICAN-STATESMAN

Texas enters Big 12 play with the second-worst defense in the league. But to hear the players tell it, that’s overlooking the far more important story.

Did you see Jerrod Heard?

“When you have somebody pouring it all on the field like Heard, you can’t help but get excited and want to be better,” linebacker Peter Jinkens said.

Texas (1-2) and Kansas (0-2) are the only two Big 12 teams allowing more than 500 yards per game. Granted, the Longhorns have nine regular-season games remaining. But at its current pace, this unit is well on its way to becoming the worst defense in school history. The school record is 407.2 yards per game allowed in 2013.

Oklahoma State heads into Saturday’s game having allowed only 303 yards per game in three victories over non-Power 5 conference opponents.

The prevailing attitude appears to be, OK, so what? Did you see what the redshirt freshman did against California? Heard’s 527 total yards was the best individual offensive showcase in UT history. It all went for naught as Cal emerged with a 45-44 win.

“The amazing performance by Jerrod was just unbelievable,” coach Charlie Strong said. “You see the loss, and you don’t want that to be overshadowed, because he really played an unbelievable game.”

Strong could probably say something similar about the Texas defense. The unit has been unbelievable for different reasons. Cal’s Khalfani Muhammad had 164 yards on 10 carries. Vic Enwere averaged 4.6 yards on 16 carries.

The Horns must figure out a way to stop opposing ball carriers, or at least slow them down. UT’s next three opponents have offensive numbers similar or better than Cal’s.

“We’ve got to get a good fit in our gaps, be able to get off our blocks and make tackles,” defensive tackle Poona Ford said. “Tackling is a big thing; we’ve got to be able to tackle.”

Why has Texas struggled in its first three games? Look at who’s not out there. Jordan Hicks is now in Philadelphia, driving Tony Romo into the ground and breaking his collarbone.

Mykkele Thompson is now in New York, recovering from a torn Achilles during Giants training camp. Malcom Brown and Quandre Diggs are itching for their chance in New England and Detroit, respectively.

Back here at home, eight freshmen are listed among the top 22 names on UT’s defensive depth chart. Redshirt freshman linebacker Ed Freeman told the Statesman on Monday that he’s out 6-8 weeks with a shoulder injury, too.

Heard has only two career starts on his résumé, but his dynamic play-making ability sparked new energy inside the program. That’s why UT’s defensive players feel an urge to get things figured out.

Look at the fourth quarter last Saturday. The Golden Bears had 14 offensive plays and only 2 yards rushing during the period. To be fair, it appeared Cal coach Sonny Dykes looked content just to hand it off and eat up the clock.

Malik Jefferson said after the game he was frustrated, because “We waited until the end to show that.”

Perhaps allowing 400 or 500 yards is the new normal in college football. No, Strong said. “It’s all mistakes that we’re making. We’re doing it to ourselves,” he said.

Strong believes in forcing the offense to piece together long drives. “Listen, make it an 11- or 12-play drive and see if they’re patient enough to do it,” he said. Cal was. The Bears had four scoring drives last eight plays or longer.

Oklahoma State has pieced together six scoring drives lasting eight plays or more this season. The Cowboys have scored on their first drive of the second half in all three games.

Jinkens said the whole team was energized by Heard’s play. Can it carry over this week and simply energize the defense?

“When he started to make the plays, now it was out turn,” Jinkens said. “They’re out there doing their job. Now, it’s our time to do ours.”