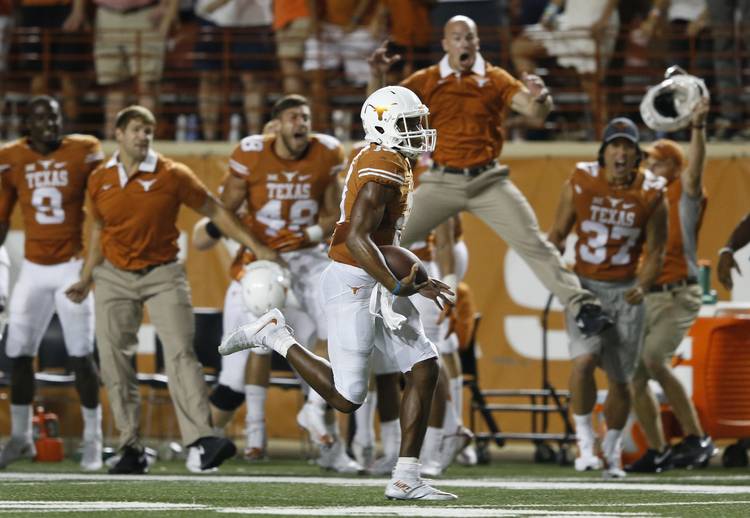 Texas’ quarterbacks of the present and the past have grown friendly since Heard was installed as the starter two weeks ago.

And get this: Heard initiated the dialogue after receiving Young’s digits from receiver Daje Johnson.

“As a guy I always looked up to and watched every Saturday as a young kid, to actually get to text him means a lot,” Heard said Monday.

Earlier in the day, Heard said Young reached out to him and congratulated him on his virtuoso performance in Saturday’s heartbreaking loss to Cal. Making his second start, Heard accumulated 527 yards of total offense, eclipsing the school record of 506 yards that Young set in 2005 against Oklahoma State. Heard also joined Colt McCoy as the only players in program history to throw for 300 yards and run for 100.

“He said he was proud of me and to keep my head up and keep going,” Heard said.

Tyrone Swoopes, whom Heard supplanted as quarterback after one game, has said he does not have a relationship with Young.

Freeman out 6-8 weeks: So apparently Edwin Freeman was hurt after all.

The freshman linebacker was the source of criticism Saturday for purposefully collapsing to stall Cal’s offense in the red zone. Cal quarterback Jared Goff was clearly agitated.

Turns out, Freeman flopped only so he could leave the field after seriously injuring his shoulder on the previously play.

Freeman told the American-Statesman that he expects to miss six to eight weeks and that an X-ray was scheduled for Monday to determine if surgery is needed.

Freeman, who starts when Texas opens with three linebackers, has seven tackles, two tackles for loss, and a forced fumble. He’s listed ahead of freshman Anthony Wheeler on the depth chart at weakside linebacker.

“He supported me 100 percent,” Strong said. “Steve did a job here and he was called on to do a job here. He’s gonna support this athletic program and he did a great job of supporting it.”

Patterson was fired last week over growing fan unrest and was replaced by Mike Perrin, a former Longhorns linebacker from the 1960s who carries the title of interim athletic director.

“I’ve spoken to the Chancellor’s Council twice and (Perrin’s) introduced me both times, so I had met him before he was the AD,” Strong said. “He’s gonna do a great job. He really is.”

Rose bummed out: As could be expected, Nick Rose is feeling down after missing a crucial extra point that could’ve sent the game into overtime.

“He’s really hurt by it,” said Jinkens, who considers Rose to be his best friend.

Strong said he consoled Rose in the locker room until 12:30 or 1 a.m. after the game and phoned Rose on Sunday morning.

“You can’t relive this moment,” Strong said he told Rose. “You’re gonna get the opportunity in a tight game down the stretch and you’re gonna go bang a 50-yarder to win the game.”

Trailing by a point, Rose missed the extra point following Heard’s 45-yard touchdown run with 1:11 remaining. He followed with an unsuccessful onside kick.

Short yards: Two kickoff times for upcoming home games were announced — 11 a.m. against TCU on Oct. 3, and 7 p.m. against Kansas on Nov. 7. … Safety Jason Hall (shoulder) is expected to practice Tuesday. He left in the first quarter and didn’t return. … Strong said safety Kevin Vaccaro “played really well” after replacing Dylan Haines, who was ejected in the first quarter for targeting.

Jerrod Heard is ‘unbelievable,’ as is the Texas defense (for all the wrong reasons)

Texas’ 10 most impressive freshmen — so far