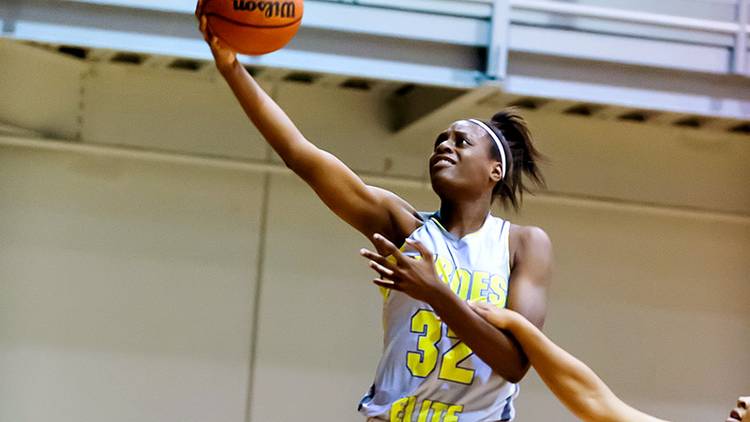 Joyner Holmes, a senior from Cedar Hill, will join the UT basketball team in 2016.

The University of Texas has capped its 2016 recruiting haul for women’s basketball by receiving a verbal commitment from one of the nation’s best high school players.

Joyner Holmes, a 6-3 forward from Cedar Hill, tweeted that she has chosen to play for the Longhorns. She is ranked as the No. 1 prospect in the country by Blue Star and No. 2 by ESPN HoopGurlz.

Holmes, who visited Texas over the weekend, chose UT over Notre Dame and Tennessee.

Last year, she played for the gold medal-winning U.S. team at the FIBA U17 World Championships in the Czech Republic. Holmes averaged 10.6 points and 5.7 rebounds during the seven-game tournament, shooting 51 percent from the field.

A senior at Cedar Hill, she will become eligible to play for the Longhorns in the 2016-17 season.

Texas had already made verbal commitments to play for the Longhorns: 5-8 point guard Alecia Sutton of St. Louis (Mo.) and 5-11 wing Jada Underwood of Mesquite.

Sutton, ranked as the No. 7 overall prospect in the country by ESPN, averaged 16.1 points, 5.5 rebounds, 4.0 assists and 2.3 steals as a junior. She led Parkway North High to a 25-6 record, finishing third in the program’s first-ever Class 5A state tournament appearance.

Underwood ranks as the No. 22 recruit in the country by ProspectsNation.com. She was averaging 24.3 points and 12 rebounds per game until her season ended last year with a torn anterior cruciate ligament.

Jerrod Heard is ‘unbelievable,’ as is the Texas defense (for all the wrong reasons)