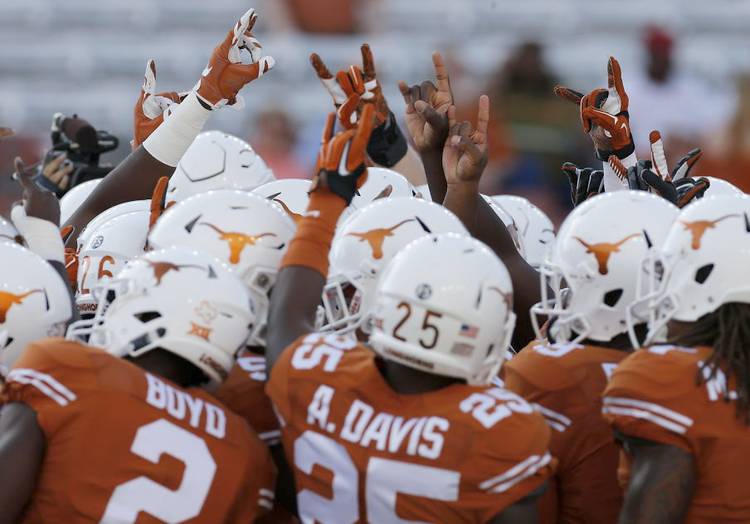 University of Texas warms up before the Longhorns game against Cal Sept. 19, 2015 at Darrell K. Royal Memorial Stadium in Austin, TX.

How will Texas fare in this year’s Big 12 race? Our staff takes:

BRIAN DAVIS: Big 12 chances depend on the D

When we left Notre Dame Stadium, I had the same thought as everyone else: This is going to be a long season. It’s amazing how one personnel decision can change things overnight. Now with Jerrod Heard at the controls, Texas has a legitimate chance to win all nine Big 12 games. That’s not to say the Longhorns will go 9-0. But does Oklahoma State really look that tough? TCU’s defense is in the infirmary. Anything can happen against Oklahoma at the Cotton Bowl. Making a bowl is more realistic today than it was on Sunday, Sept. 6. If the defense improves, then a 7-5 or 8-4 record is possible. And who wouldn’t want that?

This promises to be a wild and woolly Big 12 race. TCU is losing players by the minute and Baylor’s off-the-field issues of coaching suspensions and player discipline threaten to distract the Bears from their goal. Nobody’s defense seems to be setting the standard. As it looks now, I expect the Big 12 champion to have a loss, possibly two, and the conference might not have a team in the College Football Playoff. With Jerrod Heard transforming the team and freshmen showing up more and more, Texas will knock off a TCU, Baylor or Oklahoma and will be a much better team in November this year than it was last.

CEDRIC GOLDEN: Horns have become a tough out

Pre-Jerrod Heard, I had a really bad feeling about the Big 12 season as it applies to the Longhorns. Now, with Heard, the Longhorns are a much tougher out in conference play. I still see TCU — even with the recent injuries and arrests — winning the league title, with Baylor finishing a close second. The winner of the Texas-Oklahoma game will get the third spot, and I say it that way because I’m not ready to pick that game just yet. If things fall right, the Horns have a great chance to finish 6-3 in the Big 12 and 7-5 overall, but for that to happen, the defense is going to have to show up soon.

Aside from the finale at Baylor, there’s not a game left on the schedule that the Longhorns can’t win. Yes, aside from Iowa State and Kansas, I can’t find a sure win. What’s left is a smorgasbord of tossups, beginning Saturday against No. 24 Oklahoma State. This will be a big win for whichever team can get it. Texas was seventh in my preseason poll, and I see no reason to adjust my prediction just yet.

Texas’ 10 most impressive freshmen — so far