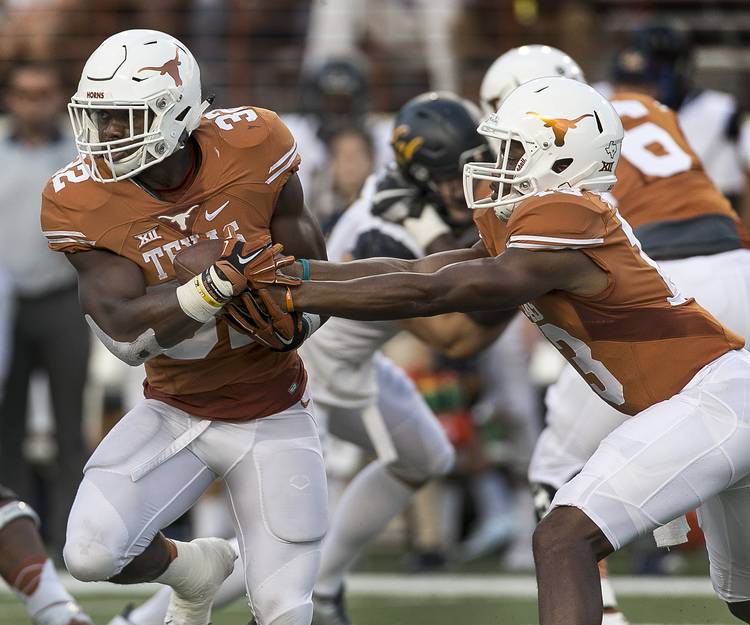 Texas running back Johnathan Gray takes a handoff from quarterback Jerrod Heard in the first half against California. (RODOLFO GONZALEZ / AMERICAN-STATESMAN)

Quarterback Jerrod Heard can be dynamic with his legs. Still, Texas play-caller Jay Norvell said he wants to get the running backs more involved against Oklahoma State.

“We really don’t want Jerrod to be our leading rusher, to be honest with you,” Norvell said after Tuesday’s practice.

Through three games, Heard is the Longhorns’ leading rusher with 247 yards, 163 of which came last week against California. Johnathan Gray (103 yards) and D’Onta Foreman (75) haven’t found many running lanes.

Gray has been more effective catching passes out of the backfield. He’s caught five balls for 79 yards.

“We need to get Johnathan going, and he has a hand in that, too,” Norvell said.

Helping Nick: Norvell said he asked kicker Nick Rose to sit in the offensive meetings on Sunday as a way of support. Rose missed the potential game-tying, point-after attempt with 1:11 remaining after Texas got within one. The Horns lost 45-44.

“I made him stay in our offensive meetings, because I wanted him to hear what I told the offense,” Norvell said. “We had so many penalties, turnovers, missed opportunities on fourth down. There were a lot of mistakes in that game by a lot of people, me included.”

Norvell actually has experience consoling a disappointed kicker. Last season while at Oklahoma, Norvell watched kicker Michael Hunnicutt miss a chip-shot field goal against No. 14 Kansas State that cost the Sooners. Hunnicutt finished the season hitting 13 of 18 field goals and going 60-for-62 on PATs.

Direct snap: One of the best-looking plays from last week’s game was actually not designed that way.

Daje Johnson went in motion and appeared to catch a direct snap from center Taylor Doyle. That’s not exactly what was supposed to happen, Norvell said.

“If we did that 1,000 times…” Norvell said with a grin. “No, that was not a designed play. It was pretty amazing how that happened. But no, the snap was just a little bit late and it hit him right in the pocket and thank god he got 7 yards on it.”

East Texas influence: Today’s players can’t identify with old TV characters. But that didn’t stop Texas tight ends coach Jeff Traylor from building an entire offense around the folks from Mayberry, N.C., while he was coaching in Gilmer.

“Oh, my goodness. I said, ‘You guys are running the Andy Griffith offense in Gilmer, Texas.’

“Then he had a whole other series on Fred Sanford.”

High fliers: From here on out, expect to hear a lot about how much Big 12 teams throw the football.

Oklahoma State has the sixth-best passing attack. The Cowboys average 330.7 yards per game. TCU and Oklahoma will be tougher challenges in the weeks ahead.

“We haven’t played the way we’re capable of playing, and we’re looking to start conference play off fresh,” cornerback Duke Thomas said. “We’re definitely looking to step up our level in the secondary and across the board on defense.”

How will Texas fare in the Big 12? Our staff takes