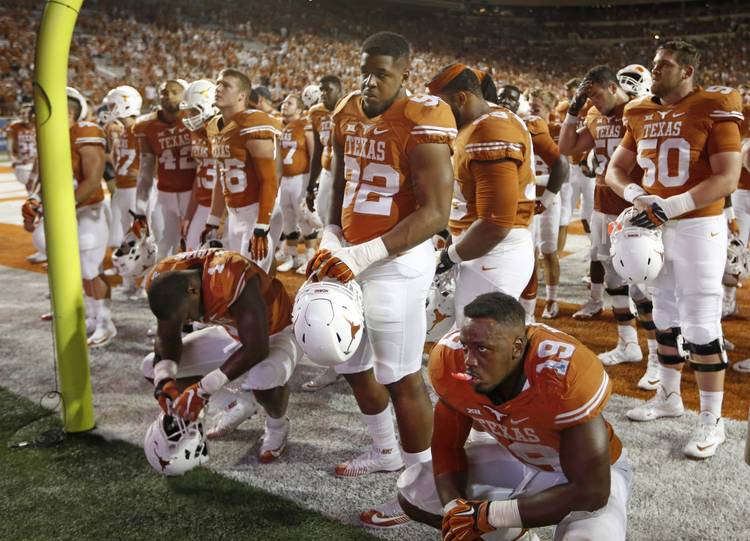 If Texas fans are frustrated with the defense, then think how Vance Bedford feels.

Texas’ defensive coordinator said he watched the game tape from last week’s loss to California frame by frame. At one point, he stopped the clicker and showed players how “it should’ve been an 8-yard gain.”

But because of small mistakes by UT defenders, Cal broke one big play after another.

Both Bedford and head coach Charlie Strong have been clear on this issue. It’s not the defensive scheme, they say. The Longhorns simply need to play better.

“I’m an old-school guy who played for Leon Fuller, and we walked up in your face and go for what you know. That’s my philosophy,” Bedford said. “Right now, we’ve got some young guys who are learning how to play. They need to start playing with more confidence.”

Texas (1-2) has the second-worst defense statistically in the Big 12 and one that ranks 118th nationally based on total yards allowed. The Longhorns are allowing 512.3 yards per game, which is on pace to shatter the school record in 2013.

Bedford doesn’t blame the unit’s youth or inexperience. He believes the Longhorns have talent. Freshmen like Malik Jefferson and Kris Boyd have swagger. This group just needs to turn it loose against 24th-ranked Oklahoma State, Bedford said.

“When you sit back and play it safe, you know what happens? Big plays,” Bedford said. “You’re better off just jumping in there, letting go and seeing what happens.”

Hope for Freeman?: Bedford said that linebacker Edwin Freeman was “day-to-day” even though the redshirt freshman told the Statesman on Monday that he’ll miss 6-8 weeks with a shoulder injury.

Freeman has taken grief on social media for falling down on the field against Cal as the Bears were about to score. As it turned out, he was hurt on the previous play.

“He’s getting X-rays and that type of thing,” Bedford said. “That’s a young man that would not take a dive. He’s as tough as they come.”

Hall back in lineup: Safety Jason Hall (shoulder) went through practice on Tuesday and should play this week, Bedford said.

Bedford believes the Longhorns may have benefited from Hall’s injury and fellow starter Dylan Haines’ ejection for targeting.

As for Haines’ ejection, Bedford just shakes his head. Per NCAA rules, any player flagged for targeting is automatically ejected. Haines’ helmet collided with Cal’s Stephen Anderson after a 22-yard catch on a bang-bang play near the sideline.

“Everyone here knows my man, Mr. Haines,” Bedford said. “Now, think about it. Do you really think he went to target somebody? I can’t comment on any official. They saw what they saw. Officials have the toughest job in the country.”

OSU gearing up: Is it possible Oklahoma State was holding back against its first three non-conference opponents? The Cowboys averaged 41.7 points win three easy wins and moved into the AP’s Top 25.

“There’s a reason why they’re ranked in the Top 25 right now,” Bedford said.