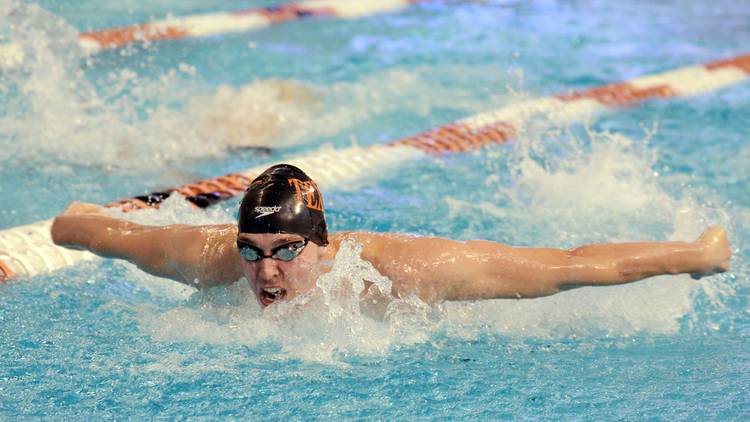 At Friday’s Orange-White swim meet, Clark Smith will represent Texas for the first time since he captured the NCAA 500-meter title in March.

And yet the day will belong to his mother.

The former Tori Trees, a six-time NCAA swimming champion for the Longhorns, is set to be inducted into the women’s Hall of Honor.

Her son is elated.

“I’m proud of her,” Clark Smith said. “It’s nice to see her get recognized for achievements, even though they were 30-some years ago. Seems forever ago to me.”

She married former Texas swimmer John Smith, himself an NCAA relays champion, and the couple had three children, each of whom picked up the sport. Meagan swam for two seasons at Akron, and Samantha, who is in high school, swims in Denver where the family resides.

“I attribute a lot to my mom and to my dad,” Clark Smith said. “They carried me a long way. They’ve prepared me for swimming at Texas. They’ve given me a lot of helpful hints. I owe the majority of my success to them.”

By standards established for the elite, Clark was a late bloomer who didn’t fully reach his stride and start winning big events until he was 12 or 13. By 16, he had made the time standard for the 2012 Olympic Trials. He was the nation’s No. 7 recruit in the 2013 class.

“He has a really long torso and kind of short legs,” said Tori Smith, who is 5-11. “He has a great swimmer’s body. Really nice feel of the water, nice swimming stroke.”

After not qualifying for the NCAAs as a freshman, Clark Smith put together an improbable showing in Iowa City last year, capturing the first 500 title in Texas history and upsetting defending event champion Cristian Quintero of USC.

“I thought I would lose in the middle of the race,” Smith said. “I didn’t think I was gonna win it. I just kind of went for it. You usually don’t know until the end.”

Fortified by a stellar crop of underclassmen, the Longhorns defeated defending champion Cal for the NCAA title — Eddie Reese’s 11th as Texas’ coach. The journey for a repeat begins Friday when Reese will split the teams into two for the annual scrimmage. The season begins in earnest Oct. 16-17 at home against Florida and Indiana.

“I can tell you that we’re still hungry,” Smith said.

Texas (3-2-3) is struggling offensively and has scored only six goals in eight matches, and none in Sunday’s 0-0 draw against Little Rock. The defense has been the catalyst, allowing just seven goals. Abby Smith leads with Big 12 with 47 saves.

Texas is 3-0 in Big 12 openers under Angela Kelly.

WVU (9-1-0) is in the midst of eight straight shutouts, a streak that began after the Mountaineers suffered their only loss to Virginia Tech on Aug. 23.

The Horns will stay on the road through the first three conference matches and play at Kansas (Oct. 2) and at Oklahoma State (Oct. 4).