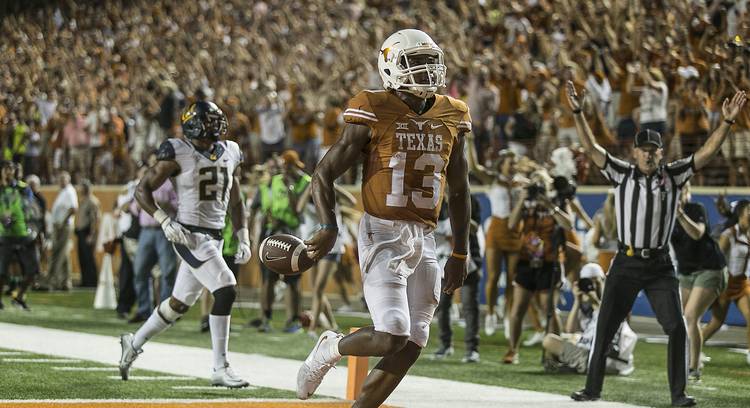 It’s remarkable how the mood inside Texas’ athletic department has shifted so radically over two weeks.

The athletic director that few liked is gone. Interim AD Mike Perrin is now mending fences and hoping to bring donors and fans back home.

The play-caller who stubbornly clung to a quarterback and system that wasn’t working has been pushed aside. Interim play-caller Jay Norvell appears to enjoy his clear mandate from coach Charlie Strong — pick up the pace.

After only two starts, there’s nothing interim about Jerrod Heard. The redshirt freshman is the first quarterback since Vince Young and Colt McCoy who gives the Longhorns real excitement and hope. Is Texas’ five-year search for another indisputable offensive leader indeed over?

That’s assuming what UT fans have seen the last two weeks carries over Saturday against No. 24 Oklahoma State (3-0). Young, who is being inducted into the UT Men’s Hall of Honor this weekend, also will be honored along with his teammates from the 2005 national championship team after the first quarter of Saturday’s game.

“I’m just very proud of him,” Young said Friday night. “It’s a huge shoe to fit in, not just talking about me, I’m speaking as a quarterback at the University of Texas, period.”

It might be good for today’s Longhorns to see an ovation for the 2005 group. That’s what happens when it all comes together. “The Horns are definitely comin’,” senior running back Johnathan Gray said. “We have the missing puzzle to the pieces.”

Mixed metaphor aside, Gray might be on to something. With Heard, the puzzle appears to be coming together. His dynamic running ability, capable passing and swagger changes everything for Texas, 1-2 this season and 7-9 under Strong.

“I had people calling me saying, ‘You guys played great.’ I’m mad, upset, pissed off. How the hell did we play great?,” UT defensive coordinator Vance Bedford said. “We gave up 500 yards and gave up all these points. That’s not great. They said, ‘Yeah, but you guys are getting better.’

“You know what they’re taking about? Heard. All they were talking about was Heard.”

Heard’s terrific play almost overshadowed Rose’s missed PAT. His 527 total yards set a new school record, knocking Young from the No. 1 spot for his show against Oklahoma State in 2005.

Rose got an outpouring of support from the UT community, and the players had a clear message. Hang in there. Keep your head up.

Big 12 play is only just beginning against the Cowboys, a team that laid down against the Horns on a chill Stillwater night last season. Coach Mike Gundy’s club went on to beat then-No. 18 Oklahoma, Washington and three more teams this year.

The Cowboys will face a totally different opponent this time around. Heard has shown moxie in the pocket and willingness to throw deep balls to Daje Johnson, John Burt and Armanti Foreman. He can utilize Gray as a safety valve. And when things break down, Heard can take off scrambling.

“We have a bounce in our step,” Norvell said. “There’s got to be an energy in practice, and that’s the big thing we’ve been focused on is the details.”

Tight end Alex De La Torre said, “I know Jerrod is going to get better every week. I’m excited to see where it goes.”

The question still lingers: If Heard is this good, why didn’t he start the season opener against Notre Dame? How could Strong and quarterbacks coach Shawn Watson not see what seems so obvious?

Strong insists that Heard, the one he watched last season, wasn’t ready. That’s why Heard redshirted. The coaches were going to play Swoopes all season long no matter what, barring injury. The gambit worked, as Heard’s redshirt status was protected.

Then during spring drills, Heard still looked off. Few called for Heard to start after watching the spring game. In August, reporters were allowed to watch three open practices. After all three, it appeared clear Swoopes was ahead of Heard.

Heard was asked whether he’d seen the famous Allen Iverson press conference — “We talkin’ about practice?” No, he said. That was 2002.

“I try to practice as hard as I can and take out the mistakes,” Heard said. “I’m not a guy that doesn’t take practice serious and then waits for game time to show up. But I really do. I try to eliminate mistakes when it’s practice time.”

In fairness to Strong, it’s difficult to evaluate a player like Heard in practice. Defenders are not allowed to tackle the quarterback. Coaches blow the play dead once Heard takes off, and defenders pull up short. It’s only in games where Heard can truly shine.

As for whether Strong and Watson should’ve played Heard earlier, well, that may become a barroom debate for the ages.“I was never unsure,” Strong said with a laugh. “I just said that.”

Linebacker Peter Jinkens said he wanted to trademark a new phrase: In Heard We Trust.

President Bush called UT coach Mack Brown after Young clinched the 2005 national title. Did President Obama call Heard after the Cal game? “Nah, nothing like that. That’d be a nice phone call, though,” Heard added.

For Texas fans, it’s simply nice to have hope.