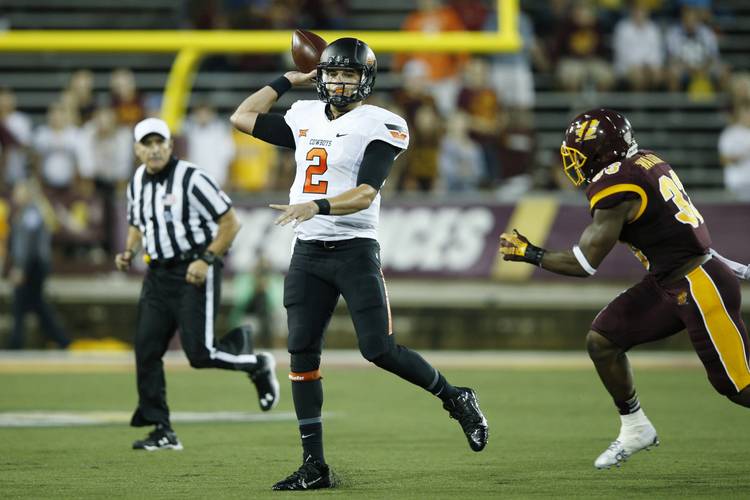 Advertisement
Each week, the American-Statesman will interview the beat writer of Texas’ opponent. This week, The Daily Oklahoman’s Kyle Fredrickson — @kylefredrickson — offers insight on the Texas-Oklahoma State matchup:
Many observers, including a columnist at your paper, accused Oklahoma State of quitting on its season after last year’s ugly loss to Texas. Since then, OSU is 5-1. What changed?
That 28-7 home loss was rock bottom last season for an OSU team on a five-game skid. Mike Gundy press conferences were tense. There were few answers for fixing a young team that continued to struggle. But everything changed the next week when the coaching staff burned quarterback Mason Rudolph’s redshirt against Baylor and OSU finally found some rhythm offensively. That momentum carried over to the crazy Bedlam victory that got the Cowboys into the Cactus Bowl, where they beat a Washington team with three first-round NFL picks on defense. It’s been a pretty amazing turnaround.
Central Michigan, Central Arkansas and UTSA — not exactly the SEC West. Why did OSU schedule so light in non-conference?
It’s just the way Gundy likes it. Although he understands the merits of strength of schedule, Gundy’s a believer that a Big 12 championship is the road to a playoff spot, and a softer non-conference schedule aids in developing a young team to reach that level of play. That being said, this will be the last super-soft slate of games OSU has in some time. The Cowboys face Pittsburgh, Oregon State and Boise State in the future.
OSU made a peculiar decision by removing Mason Rudolph from redshirt late last last season. But is the team better off for it now?
We certainly questioned it then, because few believed Rudolph could lead OSU out of the hole it dug itself into. A lot of factors contributed to how the Cowboys were able to do it, but Rudolph’s play was the key. There’s no doubt he’s OSU’s face of the program, and he’s just a sophomore. His frame and skill set show the potential to run this offense in a similar way Brandon Weeden did when the Cowboys were national title contenders. Still a lot of games to be played, though.

JUCO running back Chris Carson arrived with a ton of publicity. How has his transition been?
Anytime a former Georgia commit with one of those prototypical do-it-all SEC frames lands at a place like OSU, there are going to be high expectations. He’s been solid so far, rushing for his first 100-yard game last week against UTSA. Carson has passed all the early tests, but we’ll find if the hype checks out if he’s able to produce at a high level in the heart of the Big 12 schedule.

Oklahoma State plays TCU, Baylor and Oklahoma in November. Is this setup good for early momentum or bad because the schedule is so backloaded?
It does allow for a still young OSU team to grow before it faces its toughest challenges of the season, albeit all at home. I’d say the one potential problem could be injuries. If OSU loses any of its key playmakers who are difficult to replace in November, it might be an issue facing all the league’s most high-powered teams at once.