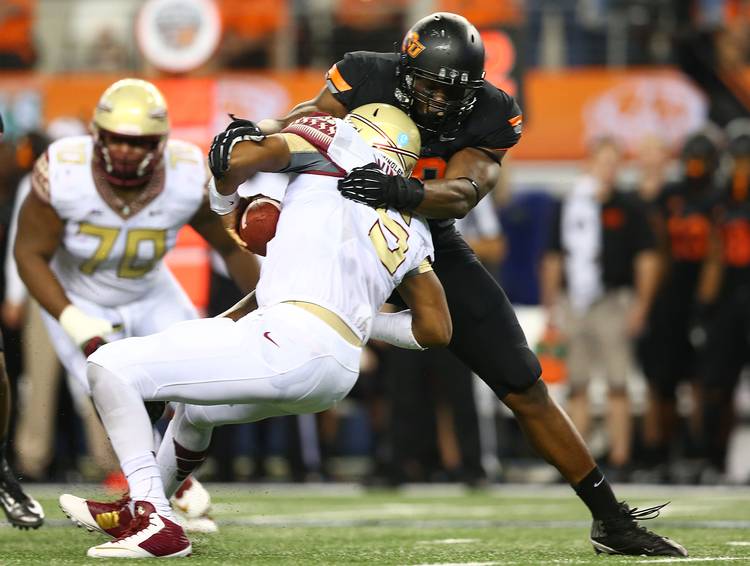 Happy days are here again, right? Jerrod Heard makes that much of a difference, correct? Texas fans would sure like to think so. Heard had a sizzling 527 total yards in last week’s loss to California, bumping Vince Young’s name from atop the UT record book. But can he do it again? Oklahoma State coaches have two game tapes to examine. They’ll examine where Heard looks before making throws and why he takes off. Heard still has the element of surprise on his side. The more tape that’s out there, the more defensive coaches can break him down.

Ogbah is a legitimate All-American candidate who has 3.5 sacks and six quarterback hurries so far. He’s recorded at least one sack in nine of his last 11 games. With Ogbah playing well, that’s helped fellow defensive end Jimmy Bean, who went to the same high school as Heard. Bean also has three sacks and was named the team’s defensive player of the game against Central Michigan. Williams appears to be getting better each week and could be a long-term answer at left tackle. No matter which pass rusher he sees, Williams must push him out wide, creating running room for the backs or Heard.

Carson comes in with high expectations. The transfer was named the Big 12’s preseason newcomer of the year. He was the fourth-best running back in junior college last season. So far with the Cowboys, he has 235 yards and three touchdowns. This isn’t so much a test of UT’s talent as a test of its pride. The defensive line, the one unit chock full of veterans, was supposed to be one of the Longhorns’ best units. Instead, the line has arguably been the worst. The Longhorns are allowing 240.7 rushing yards per game, putting this defense on pace to be the worst in school history.

California coach Sonny Dykes was so concerned about Johnson’s big-play potential, he refused to punt. Quarterback Jared Goff was asked to quick kick on fourth down four times. The gambit worked as Johnson didn’t get any return yardage. Instead, he burned Cal as a receiver, with 145 yards on five catches. Sinor averages 41.7 yards per punt and has had six downed inside the 20-yard line. It’s doubtful he’s faced a dangerous return threat this season like Johnson, though. Watch to see if the Cowboys kick it to Johnson or kick away. The field position battle is huge in these games.

Mason Rudolph is another in a long line of solid OSU quarterbacks. He’s completed nearly 70 percent of his passes for 947 yards and five touchdowns. But in some respects, it doesn’t matter what Rudolph’s statistics are. Texas won’t see another quarterback better than Cal’s Goff. From here on out, they’ll see a solid, maybe fantastic, quarterback on the opposing sideline. That’s just life in the Big 12, a league full of pass-happy play-callers. Duke Thomas, Antwuan Davis and others need to play with confidence. Jason Hall (shoulder) is expected to play, as is Dylan Haines, who was ejected last week for targeting.

Texas vs. Oklahoma State: The Eyes of Texas will be upon whom?