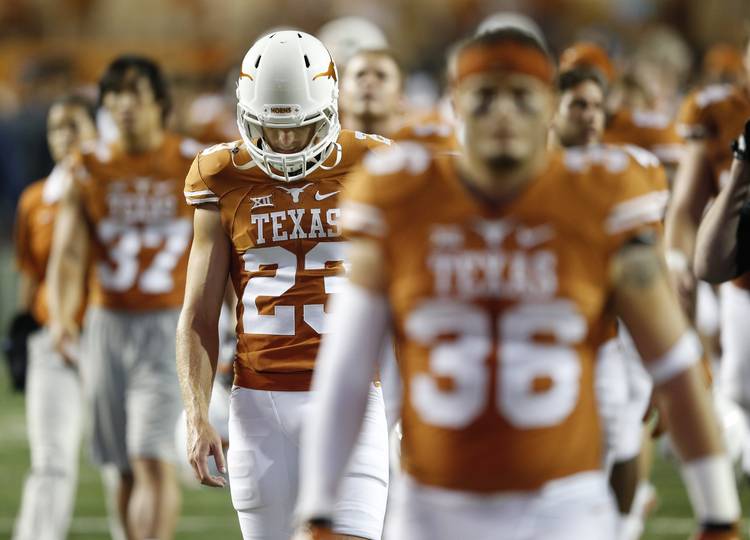 UT kicker Nick Rose walks off the field moments after missing an exrtra point that would have tied the game against California at Royal-Memorial Stadium on Saturday September 19, 2015. JAY JANNER / AMERICAN-STATESMAN

1. Will Daje Johnson make an impact on special teams?

Not if the Cowboys employ the same game plan that Cal did. The Bears acted as if Johnson had a disease, keeping their offense on the field on fourth down so Texas couldn’t substitute its return team, then quick-kicking. On kickoffs, the Bears angled the ball away from Johnson and toward the less-explosive Johnathan Gray. Johnson may have placed a curse on himself with his 85-yard punt return TD against Rice, as his opportunities are already drying up.

2. Will Nick Rose show any lingering effects of the missed extra point?

Rose has been M.I.A. since he missed a late extra point last week that could’ve sent the game against Cal into overtime. He hasn’t spoken to the media, and as of early in the week, he wasn’t even talking to his teammates and close friends. Rose was justifiably in a bad place after coming up short on a play that had become routine for the second-year starter. It remains to be seen if the miss will motivate him to do better or send him into a tailspin.

This question might as well be a weekly staple. After surrendering 280 yards to Cal, the Longhorns rank 120th nationally against the run, ahead of only eight teams. That’s an unbecoming stat for a defense whose head coach prides himself on winning individual battles and stopping the run. Last week, Oklahoma State rushed for 222 yards and four touchdowns in a rout of UTSA. Acclaimed junior college transfer Chris Carson notched his first 100-yard effort and scored twice.

4. What will Jerrod Heard do for an encore?

In just his second start, Heard surpassed Vince Young, Colt McCoy and every other Longhorns quarterback with a school-record 527 yards of total offense against Cal. He authored three fourth-quarter touchdown drives, including two in which he scored from 13 and 45 yards. Offensive play-caller Jay Norvell acknowledged the other day that defenses won’t continue to “let Jerrod just run around.” Will Oklahoma State defensive coordinator Glenn Spencer develop the blueprint for stopping him?