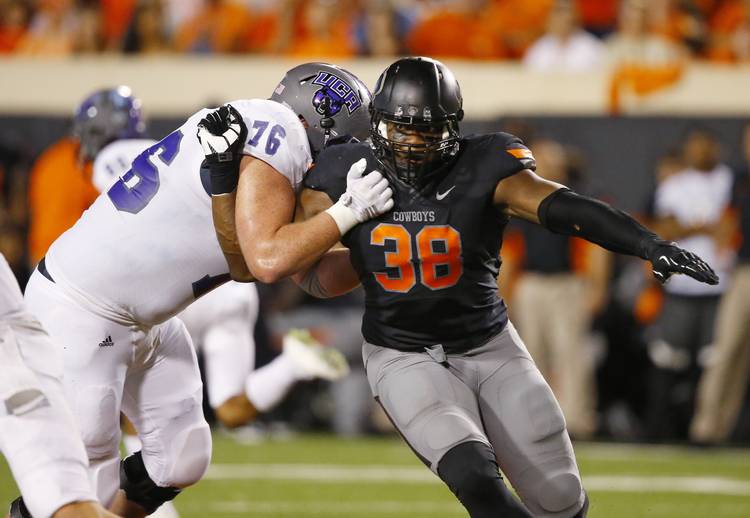 Rudolph was headed for a redshirt season in 2014 before he made his debut in the 11th game against Baylor — the week after the Cowboys imploded in a 28-7 loss to Texas. Rudolph is 5-1 as a starter, including wins over Oklahoma and Washington. Two weeks ago he threw for 401 yards against Central Arkansas, but did not reach 300 yards against Central Michigan or UTSA. Rudolph (6-4, 220) is not a serious threat to run and draws parallels to former Cowboy (and current Cowboy, in Dallas) Brandon Weeden.

Ogbah is the Big 12’s reigning defensive lineman of the year, which is even more impressive when you think of who he beat out for the honor — Texas’ Malcom Brown, Baylor’s Shawn Oakman and Oklahoma’s Jordan Phillips, to name a few. Ogbah, a junior, is off to another stellar season, registering a sack in all three games (3.5 total). The product of Houston’s George Bush is among 58 Texans on OSU’s roster. He recorded a sack in last year’s loss to Texas.

The 5-feet, 8-inch senior tends to go undetected until it’s too late. Eight of his 12 receptions have resulted in a gain of 15 yards or more, and four have gone for at least 30 yards. He’s averaging 23 yards per reception, which should have the attention of a Texas secondary that has been chewed up in man coverage and could be without safety Jason Hall (shoulder). Last year against Texas, Glidden pulled in three catches for 31 yards.