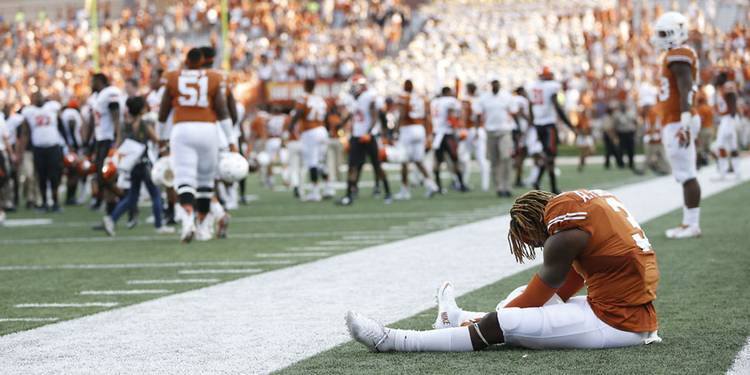 For the second week in a row, Texas has been done in by the kicking game.

It wasn’t a missed extra point from Nick Rose this time. But it was a play that was just as shocking, surprising, heartbreaking, crushing — take your pick, Longhorn fan.

Texas punter Michael Dickson flubbed a punt snap and got off a left-footed punt that went only 10 yards, giving Oklahoma State possession with 30 seconds left at Texas’ 18-yard line, needing only a field goal to break a 27-27 tie.

The Cowboys got it, a 40-yarder by Ben Grogan, to stun the crowd at Royal-Memorial Stadium. The loss sends Texas to 1-3 on the season and 0-1 in Big 12 play — with No. 3 TCU and No. 15 Oklahoma on the horizon these next two games.

The heartbreak ending spoiled what was a big day for the Texas defense, which produced two touchdowns for the first time since the Longhorns put up two defensive scores against Oklahoma State in 2009. Penalties also played a big factor in this one — Texas had two touchdowns (a long pass to John Burt and a run by D’Onta Foreman) and an interception called back because of flags.

“The amazing thing about this game is it’s a game of life,” a subdued Charlie Strong said after the game. “When you get knocked down, you gotta pick yourself back up. The last two weekends, we’ve had the game in hand and just let it slip away from us.”

How did Heard follow up his record-breaking offensive performance against Cal? The redshirt freshman was only 9 of 17 for 119 yards in the passing game, with one interception and no touchdowns. He added 48 yards on 19 carries on the ground. Total yards: 167, or 360 fewer than last week.

He wasn’t the only Longhorns notable who had quiet days. Johnathan Gray rushed for 55 yards on 11 carries, and 42 of those 55 came on one run, meaning he had 10 rushes for 13 yards beyond that. Burt, who had one big catch in every game leading up to this one, had one catch for 4 yards. Malik Jefferson had two tackles. And Daje Johnson (1 rush for 9 yards, 2 catches for 6 yards, 3 punt returns for a 12-yard average and 4 kickoff returns for a 25-yard average) didn’t make an impact.

Injury updates: Right tackle Kent Perkins and cornerback Davante Davis both left the game with injuries and did not return. Wide receiver Marcus Johnson, who hadn’t played since the season opener at Notre Dame, did play. He had a big 47-yard catch in the first quarter.

Up next for Texas: Third-ranked TCU. It’ll be an 11 a.m. kickoff at Amon Carter Stadium next Saturday.