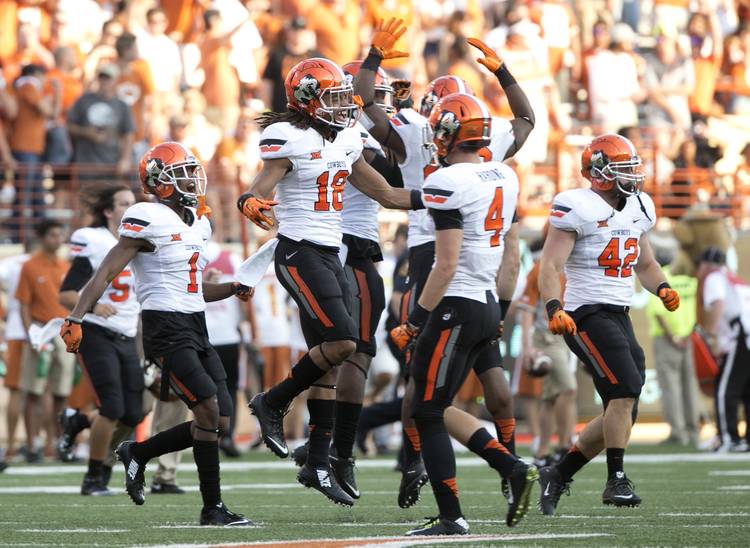 True freshman Holton Hill came off his man and picked off an overthrown pass, returning it 41 yards for the go-ahead score in the third quarter.

The Longhorns, who nearly rallied back from three touchdowns back last week, produced zero points in the fourth quarter. Texas led 27-24 after three, then saw Oklahoma State kick two field goals, including the game winner with six seconds left.

In the second quarter, the much-maligned Longhorns defense held Oklahoma State to a lone field goal and scored on Hassan Ridgeway’s 33-yard touchdown rumble while the Texas offense uncorked a 12-play, 97-yard drive.

Take your pick. Oklahoma State sliced and diced the Texas defense, hitting one slant pattern after another. The Cowboys had five passes of more than 10 yards after just two possessions as quarterback Mason Rudolph was on fire.

On the opening play of the second half, wide receiver Marcus Johnson took a long lateral from Jerrod Heard and threw a perfect pass to John Burt downfield for what looked like a 53-yard touchdown. But the play was called back because it was ruled that Heard’s initial toss was a forward pass, not a lateral.

There were a number of them, but a roughing-the-passer call against Paul Boyette looked more like a love tapping-the-passer. It negated a Kris Boyd interception and a Texas offensive series that would have started in Cowboys territory.

Michael Dickson crushed a punt for 54 yards to the OSU 8, and Boyd tackled the Cowboys’ Jalen McCleskey for a 6-yard loss at the OSU 2. Dickson also boomed a 58-yarder on the fourth play of the game.

Easy. As good as those other punts were, Dickson’s final effort was, well, a game killer. With 36 seconds to go, he couldn’t handle the punt snap and let loose an awkward attempt with his left leg. The punt went only 10 yards and gave Oklahoma State, needing only a field goal for the win, possession at Texas’ 18-yard line.

Texas was called for all manner of fouls, including three holding penalties in the first half alone and three calls against its offensive line in one drive alone. In the opening half, the Longhorns were whistled 10 times for 81 yards, one of which negated a D’Onta Foreman touchdown run. Aren’t you supposed to get home cooking at home?

We like this Nick Rose better. After missing the game-tying extra-point try with 71 seconds left in the loss to Cal a week  ago, the senior kicker was good on kicks of 46 and 41 yards.

This may be up for grabs, but you could certainly make a case for Oklahoma State wide receiver James Washington. The sophomore out of tiny Stamford, Texas won state titles in two track events (the 200 meters and triple jump) and also went to state in tennis doubles. He led the Cowboys in touchdowns as a freshman.

The main breaker running Bellmont Hall (west side of the stadium) was blown out when a fixture went out, robbing that side of the building of all power for about 20 minutes before the game started. Power was restored.

@BDavisAAS ever notice no female athlete is ever on the sidelines 😏

Another week, another heart-breaker

Texas vs. Oklahoma State: Horns up, Horns down