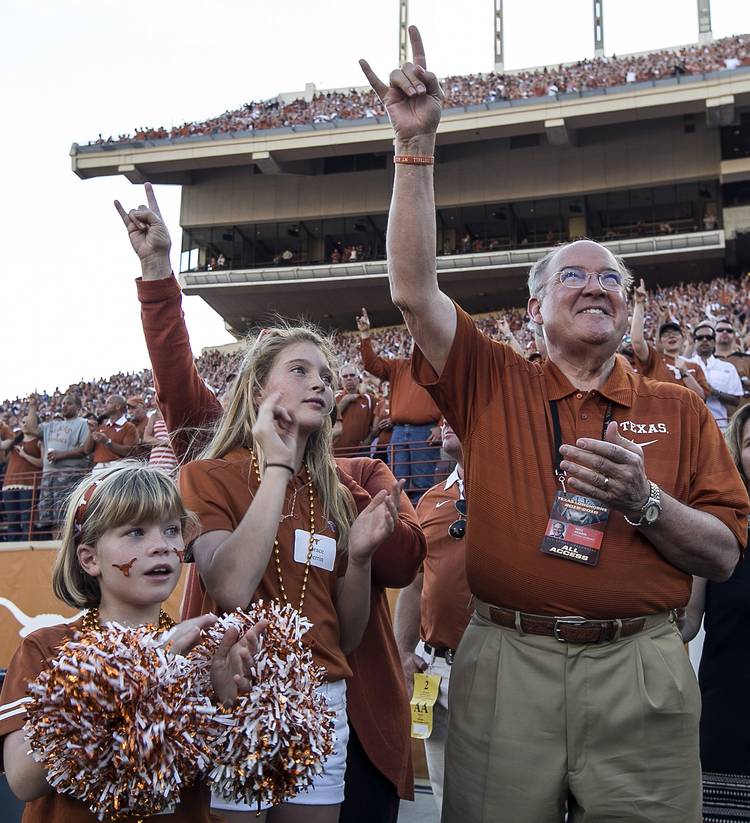 HOUSTON — Moments after Mike Perrin was announced as Texas’ interim athletic director on Sept. 15, a rival attorney of his fired off an unlikely email.

Mike Campion has reason to not like Perrin. For years, the two had duked it out in court over a major lawsuit involving the safety of a prescription drug distributed by Johnson & Johnson.

Yet Campion’s message to Perrin was not one of good riddance, but of good luck.

“He is an outstanding human being in every possible way,” Campion said by phone Friday from New Jersey. “I don’t follow UT football; I follow the pros. But God almighty are you gonna benefit from him.”

If Texas was seeking the antithesis to the abrasive Steve Patterson, it by all appearances has found it in Perrin, a hard-hitting linebacker from the 1960s under Darrell Royal who is beloved even by his nemesis.

“He is a man of complete integrity, enormous insight, and wide experience,” Campion said. “I don’t run into a guy like him very often.”

In the coming months, UT President Gregory L. Fenves must decide whether to remove Perrin’s interim tag and name him the full-time men’s athletic director or launch a search for a more traditional candidate, one with more experience in athletic administration and with fewer wrinkles than the 68-year-old Perrin.

Those closest to Perrin say he has the energy for the long haul, but that he has yet to decide if he’ll commit. He signed a one-year contract for $750,000.

“He’s gonna give it his best shot, and I think his best shot will be good enough,” said Hall of Fame running back Chris Gilbert, a teammate of Perrin’s under Royal.

Perrin’s immediate tasks are to hammer out an apparel agreement with Nike, whose exclusive negotiating window closes on Thursday, and to lean on his vast contacts to fix a culture that had slipped during Patterson’s 22 months at Texas.

Edith Royal, the almost 90-year-old widow of Darrell Royal, is getting weak and decided not to attend games this season. But she changed course when Perrin was hired, and checked in for the Sept. 19 game versus Cal, a 45-44 Longhorns heartbreak.

“We were all really excited to have someone who knows everybody here,” Edith said. “That’s gonna make a big difference.”

Perrin, a personal injury lawyer, has yet to remove his belongings from his office in downtown Houston. There are stacks of papers, mounds of books, three gavels, a box of energy bars, a men’s suit and a 2015 Texas football pocket schedule, one that you might find sitting next to the beef jerky at a gas station counter.

A creature of habit, Perrin’s daily routine has been completely disrupted, and Melinda was relieved that her husband “finally got seven hours of sleep” the other night. He enjoys crossword puzzles and completes two each day — the Houston Chronicle’s in the morning, the New York Times’ at night. Every day for the past 20 years or so, Perrin has phoned his mother, who is 94 and lives in Cameron.

Before bed, he would sit around a fire pit at the couple’s $1.23 million downtown home and watch the stars. He’d sip a glass of white wine.

The couple is shopping for a home to lease in Austin.

“Wherever we are, he’d like to have a fire pit,” Melinda said.

Secrets are safe with Mike Perrin.

While grilling salmon and asparagus on Labor Day, Perrin got a phone call from Fenves to gauge his interest in the job. By all appearances, Fenves had already made up his mind to fire Patterson, though his decision wouldn’t go public for another week.

That Saturday, Perrin attended Texas’ win over Rice and joined some of his teammates from the late 1960s in a luxury box they share. He was a senior starter in 1968, when the Longhorns started 0-1-1 before engineering a win streak that would reach 30 straight games in the 1970 season.

Perrin kept hush about what was to come down three days later.

“I felt like something was going on,” Gilbert said. “We’re gonna miss Mike in the box. He’s gonna be a few rooms down, I guess.”

It’s said that an individual is a reflection of the people with whom he surrounds himself. Perrin’s associates are successful, and among them are some of the most influential figures in Texas athletics:

Perrin fits right in with his peers. After law school at Texas, he did something called topping the bar, meaning his score on the bar exam was the highest of anyone in the state. Some of his best work came in the case against Johnson & Johnson. His firm, Bailey, Perrin & Bailey, was a driving force of the lawsuits and represented several states that accused the healthcare company of misrepresenting the side effects of Risperdal, a drug used to treat schizophrenia.

Perrin helped win trials on behalf of Arkansas for $1.2 billion and Louisiana for $258 million; both judgments were later reversed by the supreme courts in those states.

In June, a South Carolina supreme court affirmed a decision against Johnson & Johnson for $136 million.

It could go down as Perrin’s final legal victory.

Perrin, who grew up in Cameron, met Melinda on a blind date during his freshman year at UT. She had been attending Stephens College in Missouri, and was visiting Austin to see her father, John Hill, be sworn in as secretary of state. During a decorated political career, John Hill also would serve as state attorney general and as state supreme court justice.

Mike and Melinda stayed in touch through letters, and Melinda transferred to Texas the following year. They married after graduation, and had three children. Jena Ehlinger, the mother of Westlake High School and future Texas quarterback Sam Ehlinger, was the family’s babysitter.

“She (Melinda) may be the best AD of the two,” Longhorn great Bill Bradley said.

By all appearances, Perrin had been slowing down and taking on fewer cases. Approaching 70, retirement couldn’t have been far off. And, who knows, it still might be.

He kills time boating at the family’s home on Galveston Bay. His daughter is writing a novel, and enlisted her father as a research assistant. Perrin enjoys cooking and listening to live music and is fascinated by maps.

Road trips with grandchildren to various national parks have been put on hold.

“We may be looking at football stadiums instead,” Melinda said.