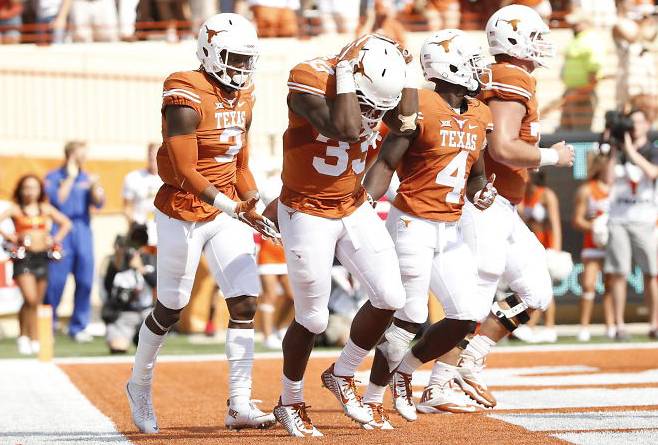 Texas running back D'Onta Foreman hangs his head after running for touchdown in the second quarter against Oklahoma State, but the run was called back due to a holding call. DEBORAH CANNON/AMERICAN-STATESMAN

Nick Rose was greeted to light applause as he jogged onto the field for the first time since he botched a key extra point last week against Cal.

He made the first-quarter kick, of 41 yards, in Texas’ 30-27 loss to Oklahoma State. Rose made a 46-yarder later in the quarter.

His accuracy was a vast departure from a week earlier, when a despondent Rose holed up and didn’t speak with teammates after he missed an extra point with 71 seconds to go that could’ve sent the game into overtime. Texas fell to Cal, 45-44. Saturday’s kicking issues were with punter Michael Dickson, whose mishandled snap and 10-yard punt allowed Oklahoma State to kick the winning field goal.

Rose’s kicking gaffe from last week is beginning to look like an anomaly. He has made every other extra point this season, and has missed only one field goal — a 52-yarder against Notre Dame. He’s 4 of 5 on field goals.

Penalties: Penalties against Texas wiped out touchdowns by D’Onta Foreman (holding on Patrick Vahe) and John Burt (illegal pass by Marcus Johnson), and an interception that would’ve been the first for freshman Kris Boyd.

In all, the Longhorns committed 16 penalties for 128 yards. Two penalties came on the same kickoff return before halftime. As a result, Texas started at the 3.

On one first-half drive, the offensive line accounted for three penalties. It was not a good look for line coach Joe Wickline, who was facing his former employer with whom he’s embroiled in a nasty lawsuit.

Freeman out: As expected, linebacker Ed Freeman sat out after injuring his shoulder against Cal. Freeman had told the American-Statesman that he’s expected to miss six to eight weeks, but defensive coordinator Vance Bedford left the door open for Freeman to return.

By all appearances, Freeman never had a shot as he watched the game in shorts and with his right arm in a sling.

Freshman Anthony Wheeler played in place of Freeman and had five tackles.

Short yards: The 2005 national championship team was honored after the first quarter. Two members on the team, Vince Young and Michael Huff, were inducted into the men’s Hall of Honor on Friday. … Kevin Durant and Matthew McConaughey watched from the sideline. … Neither coaching staff could use their headsets from the first quarter on because of technical issues on OSU’s side. This wasn’t a huge deal for Texas, as play-callers Jay Norvell and Vance Bedford work from the sideline and not upstairs, anyway. … Texas scored two defensive touchdowns (Hassan Ridgeway and Holton Hill) for the first time since 2009 against Oklahoma State. … Freshman DeAndre McNeal made his first significant impact with a 9-yard gain on a jetsweep. … Right tackle Kent Perkins and cornerback Davante Davis left the game with knee injuries and did not return.