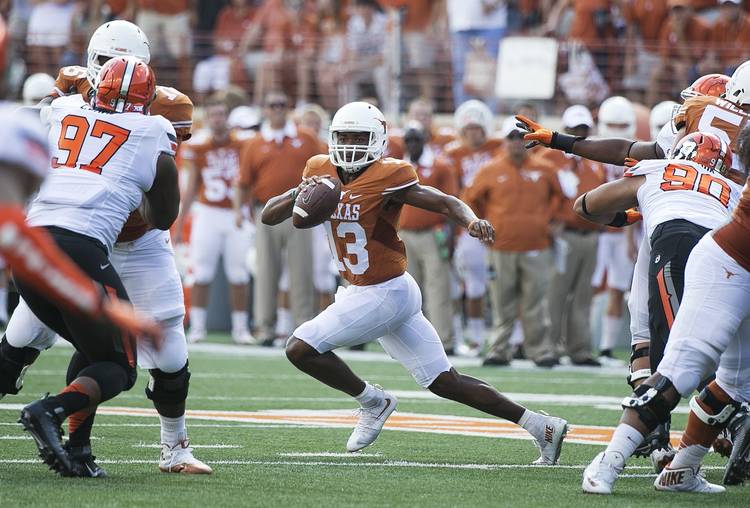 Texas's Jerrod Heard looks to pass against Oklahoma State during the first half at Royal Memorial Stadium on Saturday, September 26, 2015. DEBORAH CANNON / AMERICAN-STATESMAN

On Saturday morning, we asked four questions about the Texas-Oklahoma State matchup.

DID DAJE JOHNSON MAKE AN IMPACT ON SPECIAL TEAMS?

No. At least Oklahoma State punted to him — last week, Cal made the conscious decision not to — but Johnson wasn’t able to produce any of the special teams magic he showed us against Rice. In fact, it was a relatively quiet day for him in all phases of the game. Johnson ended up with 10 touches — one carry for 9 yards, two catches for 6 yards, three punt returns for a 12-yard average, and four kickoff returns for an average of 25.2 yards.

DID NICK ROSE SHOW ANY LINGERING EFFECTS FROM THE MISSED EXTRA POINT?

No. At least, none that we saw. Fans showed him a little love as he trotted out for his first field goal attempt — which was good. Rose, who was nailing kicks from 40 yards out during pre-game warmups, nailed 41- and a 46-yard field goals and was perfect on extra points. Maybe next week, the question should be whether Michael Dickson shows any lingering effects from his botched punt.

Yes. Let’s look at the numbers. Oklahoma State had 46 carries and finished with 103 yards. That’s an average of 2.2 yards per carry. The Longhorns likely will take that any day. The longest run from scrimmage was 16 yards, by backup quarterback J.W. Walsh. Running back Chris Carson, coming off his first 100-yard game, finished with only 39 yards. The defensive line, particularly Poona Ford, did a good job of plugging holes in the middle. Last week, against UTSA, the Cowboys rushed for 222 yards.

WHAT DID JERROD HEARD DO FOR AN ENCORE?

Heard was good, not great. No one was really expecting Heard to bump himself off UT’s single-game yardage record, as he did to Vince Young last week against Cal. But he didn’t have a signature play Saturday save for the 47-yard completion to Marcus Johnson. Heard had 19 carries for 48 net yards (he was sacked seven times) and was 9 of 17 for 119 yards and an interception. And this week, Texas was shut out in the fourth quarter, a far cry from the three touchdowns he led the Longhorns to in the fourth quarter last week.

Texas vs. Oklahoma State: Horns up, Horns down