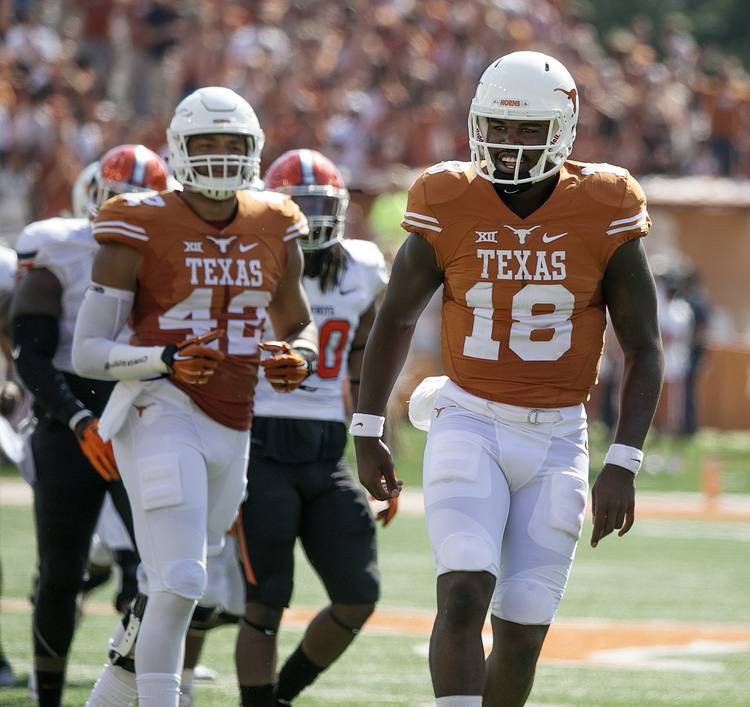 How’s this for irony: Tyrone Swoopes, who lost his job as Texas’ quarterback in part because he’s doesn’t run well, is back in the mix.

Because of his feet.

Early in Saturday’s 30-27 loss to Oklahoma State, a package was unveiled for Swoopes, who made his first meaningful appearance since getting benched after the Notre Dame debacle to start the season.

With the simple instruction to run forward, Swoopes picked up 35 yards, two first downs and a first-half touchdown on three carries. He did not attempt a pass.

It sounds like Swoopes, at 244 pounds, will continue to fill this role as a way to limit the hits incurred by starter Jerrod Heard, who is the more nimble of the two.

“That’s why we put that package in for him,” coach Charlie Strong said. “We didn’t want to let Jerrod take a lot of hits. We put Tyrone in there and let him be the short yardage guy.”

There’s no hint of a quarterback controversy. However, for the first time in Strong’s 17 games at Texas, a multi-quarterback system is in place.

Swoopes, who spoke with the media after the game for the first time since being benched, said the package was installed early in the week. Strong had made it clear he was concerned with Heard’s running, or more accurately, his brazenness to eschew the sideline for extra yards.

Heard gained 103 yards, but lost 55 on seven sacks for a net total of 48. Heard did not address the media afterward because he was feeling sick, which might’ve contributed to his so-so performance.

“I was excited,” Swoopes said. “Just another chance to get on the field and help the team out.”

Swoopes, who started 12 games in 2014, did not play against Cal last week after appearing in mop-up duty against Rice.

Swoopes said he has taken the demotion in stride.

“It’s been easy because you’re always one play from going back in,” he said.

Swoopes entered on Texas’ third drive and rumbled for 12 yards on third-and-1. After he headed to the sideline, the drive stalled, and Nick Rose made a 46-yard field goal.

Swoopes’ next two carries came on  the same second-quarter drive. Once more on third-and-1, he took off for 16 yards. He sat out the next four plays before running into the end zone from the 7 on fourth-and-2.

To recap: On three touches, Swoopes converted two third downs and a fourth down. That’ll keep him in the conversation when Jay Norvell’s offensive coaching staff schemes for next week’s game at TCU.

“Tyrone’s been a big impact in this offense,” said running back Johnathan Gray, who led Texas with 55 yards on 11 carries. “We also have Jerrod Heard. Both great guys, both talented guys, and both guys that can help this team.”

Oklahoma State also played two quarterbacks. J.W. Walsh played the role of Swoopes and carried four times for 27 yards and a first-quarter touchdown. Walsh, the understudy to Mason Rudolph, also threw for a score on the goal line when he motioned to run but pulled back and found Jeremy Seaton to cap a 98-yard drive.

If Texas has plays where Swoopes passes, no one is telling.

“I can’t answer that,” Swoopes said with a smile.

Another week, another heart-breaker