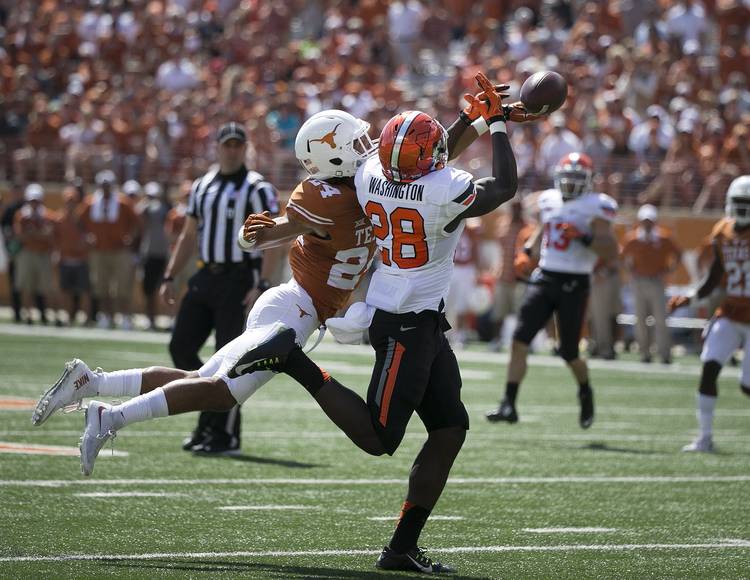 And given a second chance, it’s doubtful Michael Dickson drops that snap against Oklahoma State. The freshman punter likely gets off a decent kick, and the Cowboys must move a modest amount before getting into field goal range.

Ifs and buts don’t win football games, though. The old Bill Parcells axiom still rings true: You are what your record says you are.

“It’s tough when you lose two games like that,” linebacker Peter Jinkens said after Saturday’s 30-27 loss to the Cowboys. “But you’ve just got to go back to the drawing board, keep pushing, keep working hard.”

UT fans let the officiating crew have it afterward, showering them with boos as they scampered off the field. Take emotion over the last two losses and questionable penalties in Saturday’s game out of the equation, though. Look what remains. The Longhorns indeed have some positive things cooking.

Quarterback Jerrod Heard had only 167 total yards one week after piling up 527. But the running game found its legs, as Texas amassed 171 yards on the ground against Oklahoma State. But how much will that change now that right tackle Kent Perkins (knee) is out? His return is unknown.

“We knew people weren’t going to let him run around like he did last week,” UT play-caller Jay Norvell said of Heard. “That’s just the reality. There are good coaches. They’re going to make adjustments.”

Backup quarterback Tyrone Swoopes reemerged as a threat in short-yardage situations. The package, currently devoid of a UT-themed nickname, accounted for 35 yards and one touchdown.

The defensive line, the team’s most maligned unit, stood up and stuffed the Cowboys’ ground game. Oklahoma State managed only 103 yards, about 77 below its weekly average. Hassan Ridgeway scored on a 34-yard fumble return. Holton Hill raced 41 yards for a touchdown after an interception.

Dylan Haines had another pick, and Kris Boyd would’ve had one, too, if not for a questionable roughing penalty on Paul Boyette.

Ah, yes, the penalties. Texas was flagged 16 times, an uncharacteristically high number. It was the most penalties since UT had 12 flags thrown against Baylor on Dec. 3, 2011. Two touchdowns, along with Boyd’s interception, were negated because of flags.

The two most questionable calls came late in the fourth quarter. On first-and-10 from the Texas 44, OSU’s Rennie Childs got stopped for no gain. Officials flew a flag on UT’s Poona Ford for defensive holding.

ESPN cameras had a clear shot of Ford being double teamed, driven back and OSU’s Victor Salako held Ford with his arm across the Longhorns player’s chest.

“Some of those calls were…,” said Ridgeway, who held his anger as best he could. “I haven’t ever seen defensive hold on a double team when one of the dudes is still holding on to him. That surprised me.”

Texas coach Charlie Strong was apoplectic. “The (official) said it was a defensive holding call, and I said, ‘On a run play on the offense, that cannot happen.’ But it did,” Strong said.

KEYE-TV cameraman Anthony Geronimo had a shot of one official appearing to initiate contact with Strong, but the official threw a flag for unsportsmanlike conduct anyway.

“They threw the flag on me for sayin’ a little more than that,” Strong said.

Those back-to-back penalties moved the ball to the Texas 19. OSU collected a game-tying field goal with 1:33 remaining.

Big 12 officials generally do not comment on officiating unless any crew or specific individual is being reprimanded. Coaches have an opportunity to submit a report to the league office with their thoughts.

Whether the calls were good or bad, the Horns must move on. The Horned Frogs are feeling lucky after a terrific escape from Lubbock. TCU won 55-52 when Aaron Green caught a tipped pass in the end zone with 23 seconds remaining.

The Longhorns will be listed as the underdog for the fourth time in five games this season.

“The amazing thing about this game is it’s a game of life,” Strong said. “When you get knocked down, you’ve got to be able to pick yourself up.”