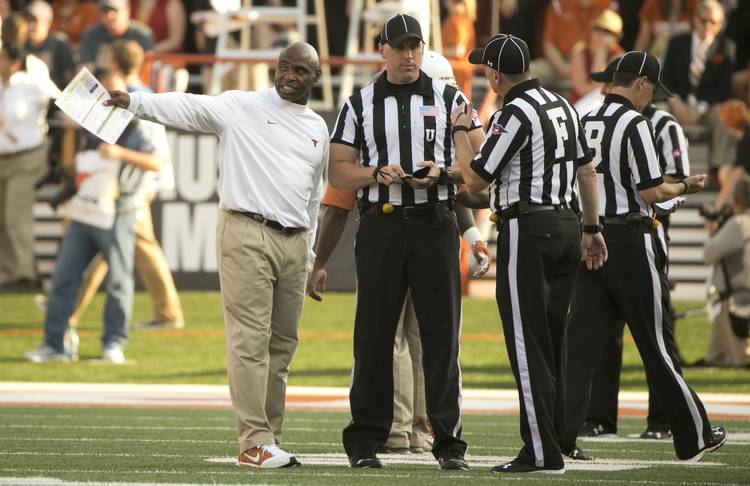 There were 141 snaps taken in Texas’ 30-27 loss to Oklahoma State on Saturday.

Kris Boyd extended his arms vertically for an impressive second-quarter interception. Then an official made a stretch of his own. Paul Boyette was flagged for roughing the passer after he shoved Mason Rudolph a tad late. That negated Boyd’s INT and return into OSU territory. The ESPN crew wasn’t buying it. Said Ed Cunningham: “This one, to me, I think you pull the flag back.” Booing ensued, and so did a field goal, which put the Cowboys in front 17-13.

2. Injury a Perk for OSU

Texas couldn’t move the ball after right tackle Kent Perkins went down with a knee injury late in the third quarter. It occurred on a 29-yard run by Jerrod Heard. Perkins ended up on the ground.

Perkins’ replacements, Marcus Hutchins and Tristan Nickelson, weren’t much help, and the Longhorns failed to make a first down the rest of the day. Even worse, they gained only 12 yards in the fourth quarter.

Perkins is probably not an All-Big 12 performer, but you would’ve thought otherwise by the impact his injury had on the offense.

At first blush, it looked like Texas had recovered a J.W. Walsh fumble at midfield in the fourth quarter. At second blush, same thing. Yet OSU retained possession despite the appearance that Duke Thomas had corralled a fumble forced by Holton Hill.

After reviewing the play, the lead official explained that “there was no clear recovery by either team.” The drive ended with a punt, but OSU controlled field position.

This call was so bad, the Big 12 might feel compelled on Monday to release a statement. For the first time Charlie Strong can recall in his coaching career, a defensive player was penalized for holding on a running play. It happened to Poona Ford, who, in a head-shaking twist, appeared to be the victim of holding. Strong was incensed, and drew a penalty for unsportsmanlike conduct. Defensive coordinator Vance Bedford tried to hold Strong back, but he kept at it after the penalty.

5. The game slipped away

There’s a reason many coaches are reluctant to put kickers and punters on scholarship — they’re not always reliable. A week after Nick Rose missed a key extra point, punter Michael Dickson, a freshman from Australia who joined the program in August, one-upped his special teams comrade with a drop deep in Texas territory.

Don’t blame Kyle Ashby; his snap was on point.

There’s no telling whether Texas would’ve still lost had Dickson gotten off, say, a 50-yarder. Given the offense’s struggles, it’d be hard to forecast a win. But Dickson’s left-footed 10-yard punt ensured defeat.