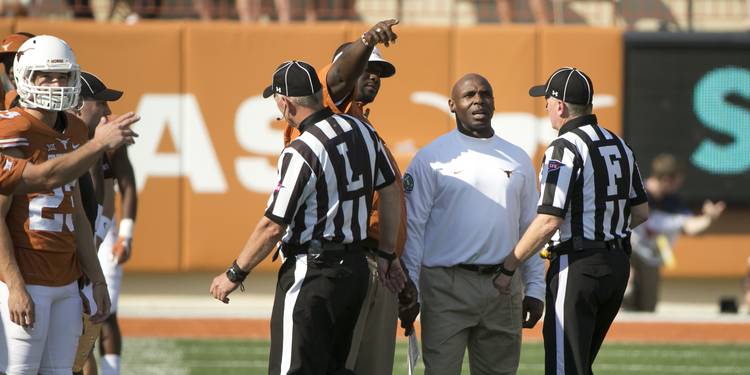 UT head coach Charlie Strong looks at a replay after an apparent touchdown was called back due to a penalty in the third quarter against Oklahoma State at Royal-Memorial Stadium on Saturday September 26, 2015. JAY JANNER / AMERICAN-STATESMAN

The Big 12 officiating supervisor on Monday night admitted “a couple” of incorrect calls in the Texas’ loss to Oklahoma State on Saturday but basically exonerated the officiating crew and didn’t rule out the crew working future Longhorn games.

Walt Anderson told the American-Statesman that the crew led by referee Alan Eck “got the vast majority of the calls right,” even though Longhorn fans have been outraged ever since they felt 16 penalties for 128 yards helped cost Texas the game in a controversial 30-27 loss.

Anderson said, “I’ve been working on that (Texas game) all day. I’ve seen the whole tape. I evaluate every play, and I think we got the vast majority right. The good news was the vast majority of fouls were there and correctly called. Unfortunately, a couple of them were missed, and we’ll correct that. I’ve never seen one perfectly officiated, and I’m not expecting to do so.”

“Oh, I’ve seen a quite a few of them,” Anderson said of defensive holding penalties on runs.”We’ve got a lot of examples of that. I’ve already shown our staff a couple of examples on video.”

Anderson said Strong was flagged for “things that were said. Some things rise to the level they’re not acceptable.”

Asked if line judge Kelly Deterding crowded or bumped Strong on the sideline before the coach’s outburst, Anderson said, “No, I think that’s an unfair statement. The one thing we tell officials to do is go over, be professional and walk the coach back to the sidelines. If you do come out on the field, we’re not going to be trigger-happy.”

Overall, however, Anderson said the crew did a good job. Big 12 policy prohibits him from making specific comments on particular plays.

“None of them (mistakes) in our opinion were egregious,” Anderson said. “Those, we’ll correct that, move forward and learn from them.”

As for future games, Anderson said his office schedules the officiating crews three weeks ahead of time.

“And that’s it. I haven’t finalized the schedule for the rest of the year,” he said. “And it’s not information that we make public.”

Texas coaches, players trying to get past controversy, focus on TCU

Texas has a predicament: Who can cover Josh Doctson?