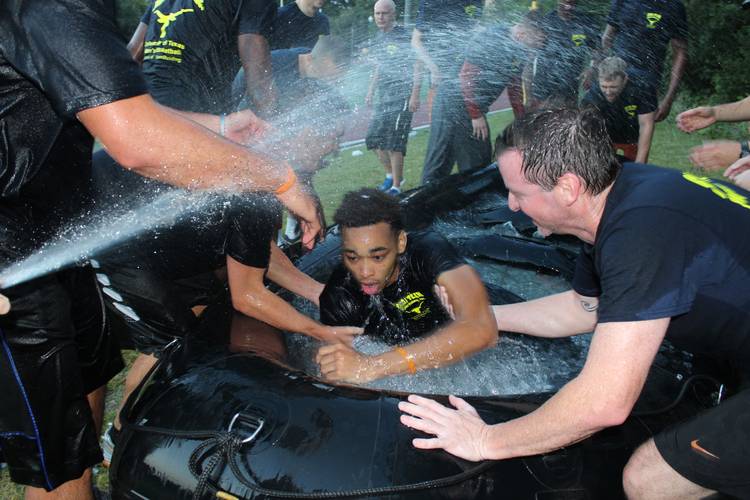 The Texas men's basketball team had to go face down into a boat with 1,000 pounds of ice during Navy SEAL training with John McGuire. (Photos provided by John McGuire)

John McGuire spent 10 years as a Navy SEAL and the last 17 putting athletes, coaches and everyday people through some of the same rugged training regimens.

He spent three days in Austin last week with the Texas men’s basketball team and came away impressed.

“I think we left Texas on very positive high note,” McGuire said. “I think you’d have to be blind, deaf or dumb if you were there all three days and didn’t notice a change. People who have been staff members there for years saw things in their players they hadn’t seen before.”

Due to NCAA compliance rules, the Longhorns have narrow time windows they can workout during the offseason. McGuire said he spent 90 minutes with the players each day. Players had to be there by 6 a.m. and it was non-stop action.

UT players still had to attend classes and go through some basketball drills later in the day.

McGuire said UT coach Shaka Smart and strength coach Daniel Roose prepared the players ahead of time. But hearing about Navy SEAL training and doing it is something else entirely.

“I could tell the trust they have for him is growing,” McGuire said. “They were willing to go into some crazy stuff. We didn’t hurt anybody. We might have scared a few people. But you know what? If you want to be tough, you have to do tough stuff. That’s just the way it is. And I think the toughest team always wins.”

On the final day, McGuire filled an inflatable boat with water and 1,000 pounds of ice. Each player had to get into the boat, go face down three times and come back up.

This was in addition to taking the players down to Lady Bird Lake and doing other water exercises.

“It’s a scary thing if you don’t know how to swim, and it shocks the body because it’s cold,” McGuire said. “But it gets everybody fired up. People think, ‘I did that, and it wasn’t so bad.’ … Usually it’s what’s between our ears that holds us back.”

Longhorn Network cameras captured everything to be broadcast when the basketball season gets closer. The season opener is Nov. 13 against Washington in Shanghai, China.

Texas coaches, players trying to get past controversy, focus on TCU