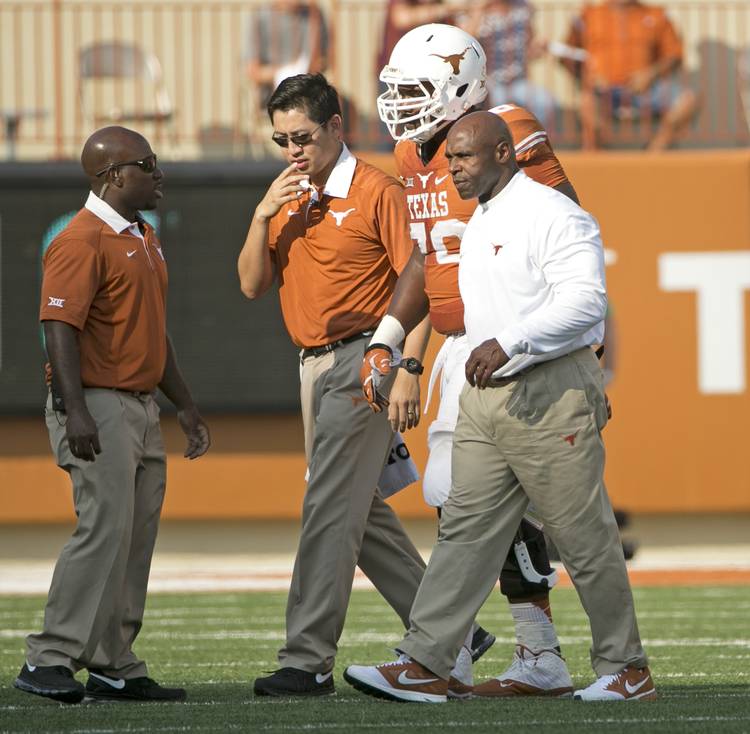 UT head coach Charlie Strong walks off the field with an injured Kent Perkins in the second half of the game against Oklahoma State at Royal-Memorial Stadium on Saturday September 26, 2015. JAY JANNER / AMERICAN-STATESMAN

Though never mentioning him by name, Texas guard Sedrick Flowers called out Hutchins for his lack of preparation leading up to a 30-27 loss in the Big 12 opener.

It appeared Flowers arrived to Monday’s press conference with the intent to take a shot at Hutchins, who was beaten consistently after he took over for Kent Perkins (knee injury) late in the third quarter.

“I think what happened is a lack of preparation by the backup,” Flowers said. “I feel as though he didn’t foresee (an injury). I don’t think he took that into consideration when he was preparing. He just saw this week as another week that he wasn’t gonna play. If he would have taken more time in practice and film review, took it more seriously, then it would have been different.”

Flowers added: “You can’t use ‘I had no reps’ as an excuse.”

Flowers was asked if he was referring to Hutchins or third-string tackle Tristan Nickelson, who took over after Hutchins got beaten twice on three plays.

“Both of them need to get in there and do the same job KP did,” Flowers said.

Hutchins, a senior who started every game last season, lost his job in the preseason to freshman left tackle Connor Williams.

Perkins’ status: Coach Charlie Strong said Perkins is “day-to-day,” which seems to be the company line for all Longhorns injuries these days.

Without Perkins, the offense ran 16 plays and gained five yards and no first downs.

“KP is a big deal for our offense,” running back Johnathan Gray said. “That might have hurt us. We can’t afford to lose guys like him. We need him to help us.”

Heard getting healthy: Strong divulged more details on the stomach illness that Jerrod Heard is dealing with and said the quarterback had a high temperature last Thursday and was pumped with fluids on Friday.

“I wasn’t that concerned because he had enough rest,” Strong said.

Heard did not address the media after the game, which is rare for the starting quarterback. He was said to be in the trainer’s room receiving treatment.

His illness may have contributed to a so-so performance. Heard was just 9 of 17 passing with one interception. He was sacked seven times.

“He’s dealing with a stomach virus,” Gray said. “He’ll have to take some medicine to get that cleared up.”

Near TD pass: A foot or two separated Marcus Johnson from his first career touchdown pass. Instead, he drew a penalty for an illegal forward pass because he was in front of Heard when he released the ball. The play — a double pass to John Burt — came on Texas’ first snap of the second half.

“When I caught it, we were about even,” Johnson said. “When I took that side step, that was the difference between it being a touchdown or not.”

Johnson said the play was put in the game plan early in the week and that Daje Johnson can also throw the pass.

Short yards: The kickoff for the Oct. 10 game against Oklahoma at the Cotton Bowl is set for 11 a.m. It’ll be aired by ABC. … Texas is a 16-point underdog against No. 4 TCU. The line opened at 18.5 points — “I didn’t know it was that bad,” Strong said. “Wow.” … Naashon Hughes said his brother, Camrhon, is now playing at Texas A&M-Commerce. Camrhon started six games at right tackle for Texas in 2014. … Strong said freshman safety DeShon Elliott has begun practicing after suffering an injury early in preseason camp.