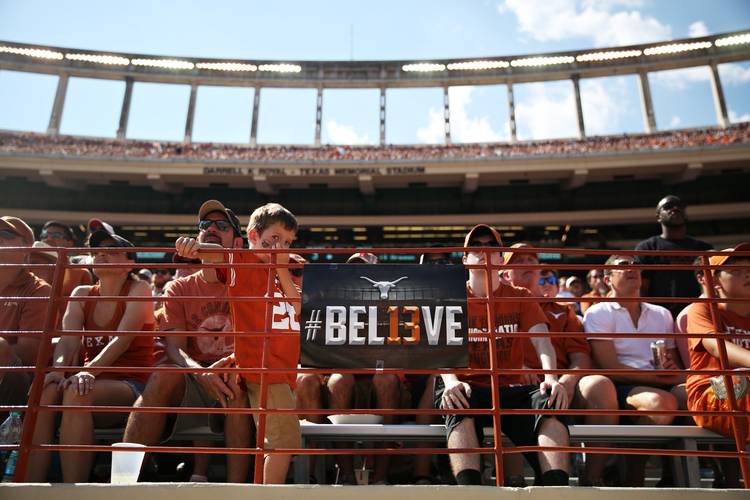 A young Texas fan displays a sign during the game against Oklahoma State at Royal-Memorial Stadium on Sept. 26, 2015. Shelby Tauber / AMERICAN-STATESMAN

It’s easy to blame officiating for what happened last Saturday at Royal-Memorial Stadium. And Texas fans may have a legitimate gripe.

Referee Alan Eck’s crew called 16 penalties against Texas in the 30-27 loss to Oklahoma State. His officials threw a season-high 11 flags against UT in last year’s Oklahoma game, too. In eight other Big 12 games under Charlie Strong, different officials threw an average of 5.8 flags.

A Big 12 spokesman said Monday the game film and post-game reports are still being reviewed.

What exactly did Strong say in the heat of the moment? “I don’t remember what I said to the official. I forgot what it was,” the coach said with a sly grin.

Officiating was still a hot topic on Monday, but Strong and the Longhorns tried their best to move on. Up next comes No. 4 TCU, which started the week as an 18.5-point favorite.

“We’re underdogs in all the games we play, so I don’t even care about that, honestly,” linebacker Peter Jinkens said. “I feel like it adds to our bite.”

The Horns held an hour-long, players-only meeting on Sunday where lots of people spoke their minds. The players know they cannot afford to backslide now, not with ranked foes TCU and Oklahoma coming.

“For us to be only four games deep, we shouldn’t take a step back,” receiver Marcus Johnson said. “We shouldn’t doubt ourselves, and we should be proud of where we are because of how hard we worked.”

There was such a doom-and-gloom atmosphere around the Longhorns last season. When things got tough, they folded. This year, there appears to be more optimism.

Quarterback Jerrod Heard, who played despite a stomach illness, has beefed up the team’s offensive totals. Last season, Texas averaged 21.4 points per game. This year, it’s up to 29.0. Most competitive teams must be able to score 30 points on any given week.

The team’s high defensive totals are breaking like a fever. What was the worst defensive unit in major college football after Week 1 now has better numbers than Kansas and Texas Tech.

This bunch talks and acts like a group still moving uphill, although the final results haven’t been what everyone wants, several players said.

“You can never take a step back, with any team,” running back Johnathan Gray said. “We’re coming together and telling each other to keep fighting for one another and keep pushing. Everybody wants to do the right things to help this team be successful.”

Hutchins got beat badly twice in three plays and was replaced on the next drive. Strong said Perkins is “day-to-day” with his knee injury.

“I feel like the guy that came in, he could’ve done a better job,” Flowers said. “He came in, he played hard, but he has to understand that once you come in, you’ve got to do your job at a high level. You can’t use ‘I had no reps’ as an excuse.”

Strong doesn’t want to use the officiating as an excuse, either.

Asked whether he’d been in a game with so many close, subjective calls, Strong said, “No, I haven’t (cough). But I do look at it like this. We have to be a better disciplined football team. They make the calls and think they see what they see. But we’ve got to be under control ourselves.”

Fans are a bottom-line bunch, though. Texas is a 1-3 football team that will be heavy underdogs the next two weeks. Not all 1-3 records are created equal, though.

Strong’s message to fans is simple: Don’t give up on the Longhorns now.

“We need everyone behind us,” Strong said. “You know what? When it flips, which its gonna flip, then everybody’s gonna want to jump on board. So, they might as well get on board right now, because it’s gonna flip.”