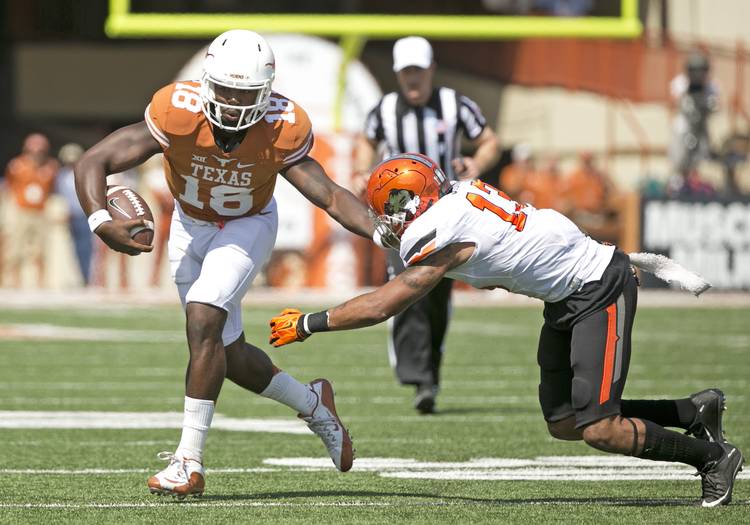 After the season opener, Texas quarterback Tyrone Swoopes lost his job and was brushed aside. Now that he’s returned, the plan is to keep him around for a little while.

Swoopes briefly reclaimed his quarterback duties against Oklahoma State last week, when he came off the bench and plowed forward in short-yardage situations. He’ll continue to do the same, with the possibility of a bigger role, when the Longhorns go to TCU this week.

The Swoopes package does not yet have a name, but it’s apparently here to stay.

“We gotta continue to grow with it and understand how people adjust and make the proper adjustments,” play-caller Jay Norvell said Tuesday.

Norvell added that “for the first time doing it, I thought they did an excellent job.”

On three carries, Swoopes twice converted a third down and also scored a touchdown from 7 yards out before halftime. He finished with 35 yards for an average of 11.7 yards per attempt.

The package was installed in part so that Swoopes, at 244 pounds, could absorb hits that would otherwise have gone to starter Jerrod Heard.

“We can do a lot with that package,” Heard said. “Swoopes is a great player. I get excited when I see him out there.”

Heard feeling OK: Heard said he’s “100 percent” recovered from a stomach virus that bothered him during the game and kept him from meeting with the media afterward.

He called the virus “hard stomachaches” that resulted from something he ate.

Norvell downplayed the illness and said it had no influence on the game plan.

Norvell backs Flowers: Not only did Norvell not scold offensive lineman Sedrick Flowers for calling out a teammate, he actually encouraged it.

“We really need more of that, to be honest with you,” he said.

On Monday, Flowers ripped reserve tackle Marcus Hutchins for a lack of preparation during the week leading up to the Oklahoma State game, asserting that Hutchins “just saw this week as another week he wasn’t gonna play.”

After taking over for Kent Perkins late in the third quarter, Hutchins was beaten badly and eventually pulled for third-string Tristan Nickelson. The offense struggled badly after Perkins left and did not convert a first down in their four fourth-quarter possessions.

“As long as our kids are constructive, I think it’s OK for our kids to speak up,” Norvell said. “We’ve been talking to our guys about being respectful but also being constructive when they have something to say. Our kids work awfully hard. When you invest early morning workouts — weight training, sprints all summer — it hurts when guys aren’t invested. I feel like it’s their responsibility to speak up.”

Perkins update: For the second day in a row, Perkins is “day to day” with a knee injury. Norvell wouldn’t disclose much, but did say Perkins “worked today” at practice.

That could mean anything from practicing full-go to light jogging.

After breakout game, does Hassan Ridgeway have more?