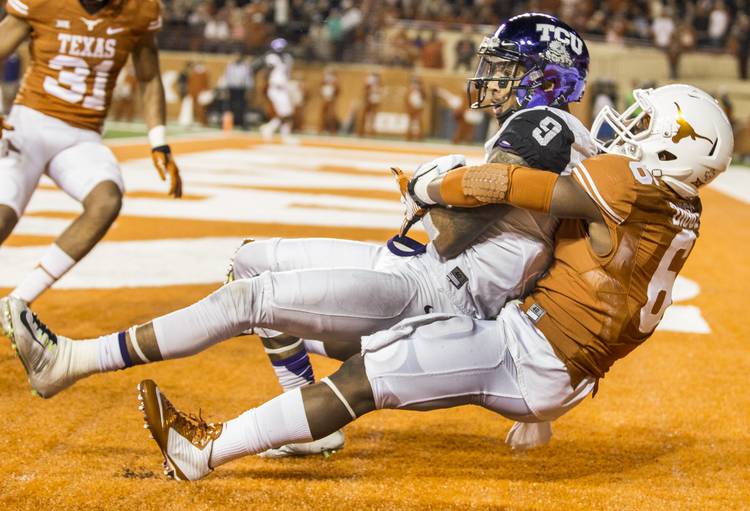 Prior to last year’s Thanksgiving game, Quandre Diggs, Texas’ outspoken cornerback, boasted that in his four seasons  he had played only one bad game.

Days later, he was torched by TCU wide receiver Josh Doctson, and Diggs’ list of career clunkers grew to two.

In Saturday’s matchup in Fort Worth, the Longhorns face a quandary without Quandre: If Diggs couldn’t cover Doctson, how does anyone else have a chance?

Overshadowed by his Heisman-contending quarterback, Doctson is having a remarkable season for the No. 4-ranked Horned Frogs. He was, in a word, unstoppable in last week’s thriller at Texas Tech, pulling in 18 passes from Trevone Boykin for 267 yards and three touchdowns in a 55-52 win.

His receptions tied a Big 12 record. His yards broke a school record. His destruction of Tech’s secondary spun like a broken record.

On the winning touchdown, it was the 6-feet, 3-inch Doctson who tipped a pass in the air that running back Aaron Green came down with at the back of the end zone. Without Doctson’s contribution to the fourth down play, a string of subpar efforts by TCU would have resulted in a loss, and weakened its standing to make the four-team playoff.

“It’s kind of hard not to notice it,” Texas receiver Marcus Johnson said of Doctson’s season. “When you see receivers playing well, you’re happy for them. They put in work like we put in work. Him and Boykin have been connecting and they’ve been playing well.”

Doctson is the Big 12’s top receiver with 35 catches, 593 yards and six touchdowns. Projected over 13 games, those stats look like some kind of joke: 113 catches, 1,926 yards, 19 touchdowns. Watch out, Michael Crabtree. At Doctson’s current pace, the Big 12-record 1,962 yards Crabtree produced in 2007 for Texas Tech would be within striking distance.

Whether the Longhorns can do anything about it will go a long way in determining if they can avoid falling to 1-4. Head coach Charlie Strong has begun to increase reps for freshmen cornerbacks Kris Boyd, Holton Hill and Davante Davis, so at least they’ll be warmed up if they draw Doctson in coverage.

Hill had a pick-six in last week’s loss to Oklahoma State, while Boyd had his first interception wiped out because of a roughing the passer penalty on Paul Boyette. Davis nearly picked off a pass, but replay affirmed that the nose of the ball made contact with the ground. Davis did not finish the game due to a knee injury; his status for this week is uncertain.

Senior Duke Thomas is playing the best among the corners, while John Bonney and Antwuan Davis are losing time to the newcomers.

“If you ask any of our (defensive backs), they’re not afraid of the challenge,” defensive end Naashon Hughes said. “Any of them will say, yeah, they’ll cover him one-on-one.”

Diggs, who is now with the Detroit Lions, had similar bravado entering last year’s matchup. He was in the midst of an all-conference season, and was primed for a big day in his final appearance at Royal-Memorial Stadium.

Yet he was beaten consistently by Doctson, whose 22-yard touchdown over Diggs put TCU in front 27-3 early in the fourth quarter. The Horned Frogs scored three more times and rolled, 48-10.

Diggs, who also muffed a punt, admitted to having “an off day.”

That’s something the current batch of corners can’t afford to do Saturday.