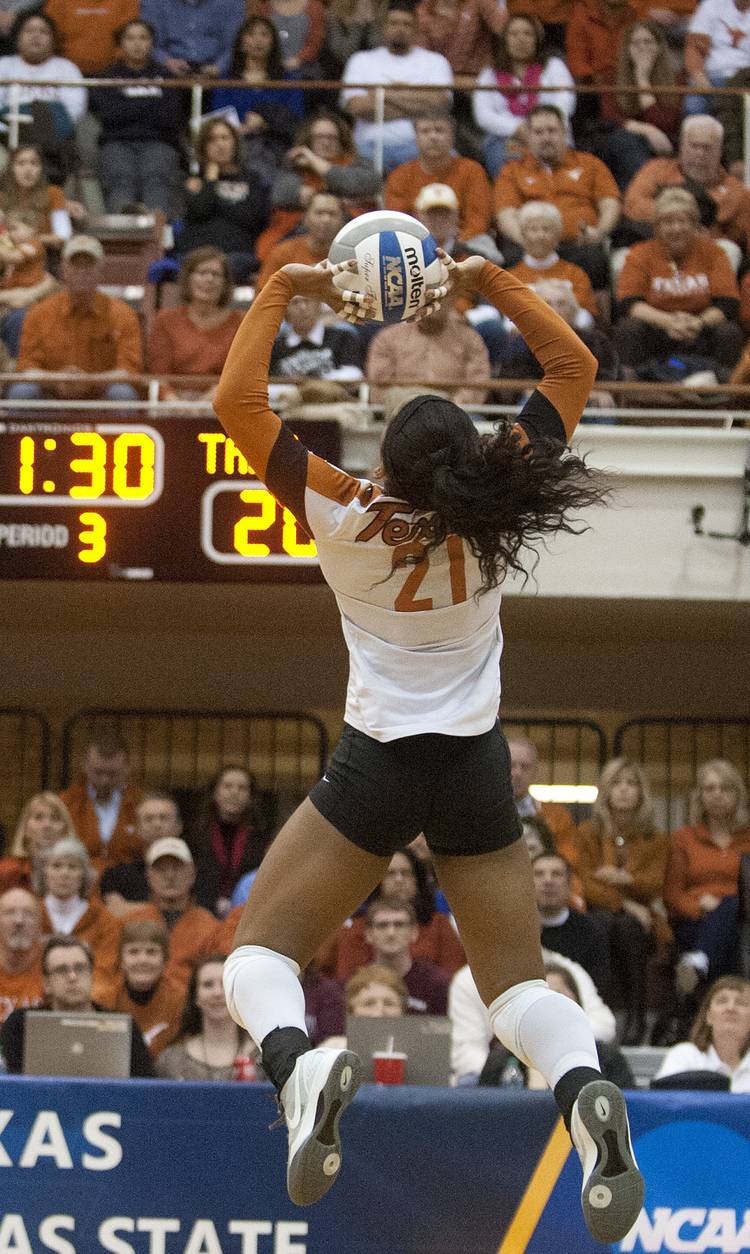 During recruiting, Chloe Collins warned college volleyball coaches that at 5 feet, 6 inches, she was done growing.

Collins is probably five or six inches shy of the prototypical size of a setter, but she’s making up for it in a variety of ways while stabilizing play at the position for third-ranked Texas.

After splitting time at the spot with Nicole Dalton last season, Collins has complete reign at setter this fall, and she’s accounted for 83 percent of Texas’ assists. A junior from Cypress Woods, Collins is expected to make her 14th straight start this season on Saturday, when Texas faces Iowa State.

“There have been times where it’s stressful for her, but she’s handled it at a very high level,” Longhorns coach Jerritt Elliott said.

After last season, Elliott challenged Collins to improve in three areas — consistency, transition setting and efficiency in setting middle blockers. She’s responded well. Collins has logged three matches in a row without an attack error, including three-set wins over TCU and West Virginia to open Big 12 play. Collins has 40 or more assists apiece in six matches for Texas (12-1).

Some of Amy Neal’s rise as a senior can be attributed to Collins, who has incorporated speed sets into her arsenal. The 5-9 Neal, the Big 12 player of the week and an All-America contender, is small for an outside hitter, and she prefers her sets lower and faster than, say, Chiaka Ogbogu, whose uncanny vertical jump calls for “moon balls” from Collins.

“I’m happy from the standpoint I’ve seen the growth in myself and I’ve seen my growth from the beginning of the preseason until now and into conference play,” Collins said. “If I can continue to build on that (growth), we’ll see some happy faces in the end.”

Part of Collins’ evolution is a result of increased playing time. Elliott scrapped last year’s 6-2 system for a 5-1, meaning Collins plays all six rotations and does not trade off with another setter. The only instances she leaves the court is when the 6-2 Dalton comes in for defensive reasons.

“Now I need to be comfortable with everyone,” Collins said. “I just thinking molding into that and being OK with it has really helped me grow.”

Hitters still missing: It sounds as if Elliott will be without two of his top hitters for a little while longer, maybe the rest of the season.

USC transfer Ebony Nwanebu had a medical setback in her debut Sept. 4 against Nebraska and has not played since. Prized freshman Micaya White (stress fracture) has yet to play, and Elliott said the team will release an update this this weekend about her status.

“We need to get a couple more confirmations from a couple things to see what direction we’re going,” Elliott said. “We’ll sit down and get something solidified.”

Elliott is resigned to the idea that Nwanebu will not be 100 percent at any point this season. She arrived from USC “beat up,” he said.

Since she has participated in a match, red-shirting Nwanebu is not an option.

Women’s swimming lands elite recruit:  Coach Carol Capitani received a big commitment for the women’s swimming team, as Claire Adams, the reigning U.S. senior national champion in the 100-meter backstroke, pledged to join Texas. Adams, of Carmel, Ind., is the No. 5 recruit in the nation and the top back-stroker.

This summer at nationals in San Antonio, Adams broke the junior world record in the 100-meter event with a winning time of 59.58 seconds. She finished as the runner-up at the junior world championships.

Adams became the second top-20 recruit to commit to Texas, joining No. 18 Lauren Case, of Woodstock, Ga., the reigning junior national champion in the 100 butterfly.