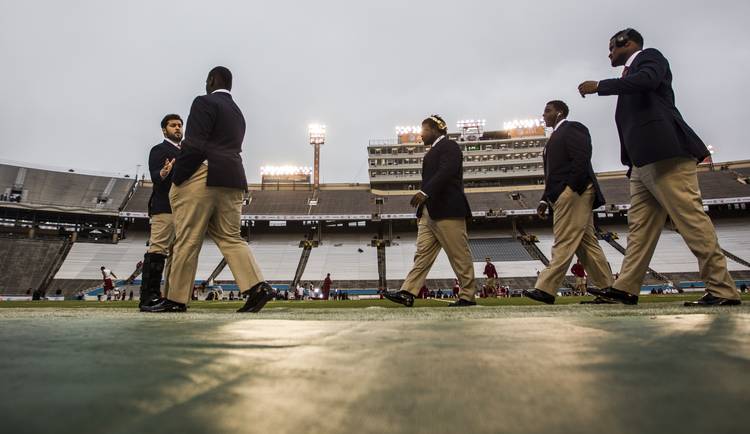 How early does the day start for the Longhorns when they play an 11 a.m. kickoff? Pretty early. Here, players enter the Cotton Bowl for last year's Oklahoma game. (RICARDO B. BRAZZIELL / AMERICAN- STATESMAN)

Texas, facing a potential 1-4 start to the season, have another wrinkle to contend with besides TCU’s explosive offense: Having to kick off at 11 in the morning.

For 11 a.m. kickoffs, game preparation is negligible. For all intents and purposes, it’s a normal game week for the Longhorns. The real difference is on game day, as the whole process is accelerated to compensate for the early kickoff.

On Saturday — as well as next Saturday, when Texas kicks off at 11 for the second week in a row, against Oklahoma in Dallas — the day begins at 5 a.m. for breakfast, followed by several team meetings back to back. Then the players arrive at the stadium to dress for the game.

The trick for some players is to rely on multiple alarms to make sure they wake up at the proper time. If that falls through, every player has a roommate to help him.

It’s a process that players are accustomed to, going back to summer and spring practices.

“It will be an early wake up. Plus I set five alarms on a regular basis,” said defensive end Naashon Hughes. “It’s pretty regular for us to get ready.”

Flowers said he doesn’t have a personal preference for a game time, but added he is looking forward to the time off following an early game. Unlike 7 p.m. kickoffs, players and coaches have the time on Saturday nights to decompress and process their game.

If last season is any indication, Texas probably would prefer a later kickoff. The Longhorns lost both of their 11 a.m. kickoff games by a combined 28 points to Oklahoma and Kansas State. Going back to the start of the 2011 season — 35 games — the Longhorns are 4-5 in 11 a.m. kickoff games, 6-5 in games that kick off in the afternoons and 23-12 in evening or night-time kickoffs.

Last year’s loss to Kansas State featured a punchless Texas offense that finished with 196 total yards, eight punts and zero points. There’s no room for a sleepy, offensive funk against TCU, which averages 51 points and 637 yards a game.

“For the team, we are used to it,” senior running back Johnathan Gray said. “We always play Oklahoma at 11 a.m. Playing TCU at 11 a.m. is just like getting up like we do for Oklahoma. We just gotta get out there and compete.