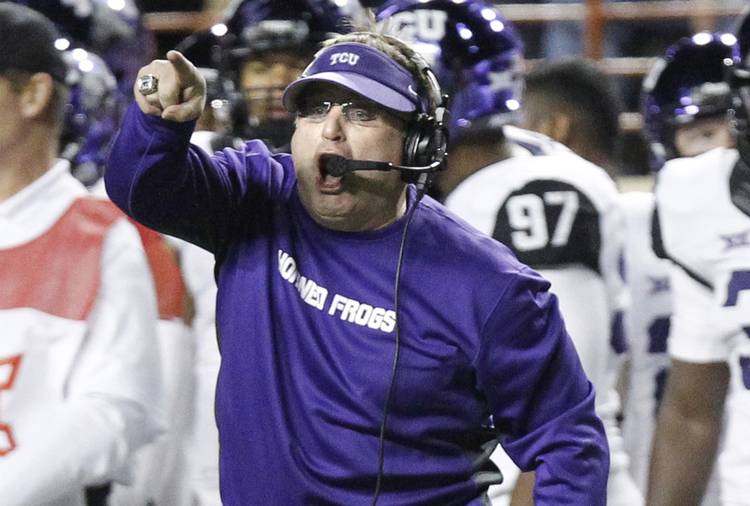 Each week of the season, the American-Statesman will interview the beat writer of Texas’ opponent. This week, the Fort Worth Star-Telegram’s Carlos Mendez — @calexmendez — offers insight on the Texas-TCU matchup:

It’s been tough to keep track. Please list the names of starters and key contributors who are expected to miss the game.
Let me open the spreadsheet. OK, expected to miss the game: WR Deante Gray, DE James McFarland, LB Sammy Douglas, S Kenny Iloka, CB Ranthony Texada, WR Ty Slanina, WR Emmanuel Porter, WR Kolby Listenbee, and DE Terrell Lathan. Listenbee is Josh Doctson’s wingman and the fastest receiver. McFarland was the returning leader in sacks. Texada started all 13 games last year as a freshman. Slanina was a highly trusted possession receiver. You may remember Lathan from a scoop-and-score on Thanksgiving last year. One of the guys who started the season hurt, DT Davion Pierson, returned last week.
Finish this sentence: TCU’s season so far has been …

Suspenseful. The opener at Minnesota went to the last drive of the game. The SMU game was five points in the fourth quarter. And last week, you honestly did not know who was going to win from the first snap to the last. Right now, the TCU season rides on how soon people can get healthy and whether the offense can score every time it has the ball. Or close to it. Talk about suspense.
True or false: Josh Doctson is the best player in the Big 12.
True. No one in the league right now has (a) his ability to adjust to the ball (check out his second touchdown catch against Tech), (b) his body control in the air; (c) his leaping ability, (d) disciplined route-running, (e) wingspan and (f) Trevone Boykin.

Gary Patterson is a defensive coach whose team has given up 37 and 52 points the past two weeks. How is Gary holding up?
Gary is hanging in there. He was almost laughing in utter bemusement at the roller-coaster ride that was Texas Tech, letting out a “Jiminy Christmas” in the postgame presser. And he knows there’s more to come. But hey, the Ferrari of an offense he has on his hands makes it easier to take.
Patterson and Baylor coach Art Briles aren’t the best of friends. In 2013, Patterson suggested Briles is classless. Recently, Patterson took another shot over Baylor’s questionable handling of Sam Ukwuachu. What’s this all about?
Heaven knows. I think it starts with the coaches. Patterson maybe isn’t so fond of Briles waltzing in and turning Baylor into a power, getting all kind of claps on the back, while he had to labor in the hinterlands of college football for years, winning a bunch of conference titles that nobody paid attention to before he got his chance in the Big 12. But hey, just a hunch.

Does the early bird get the win? Horns shrug off kickoff times

Texas vs. TCU: Matchups that matter