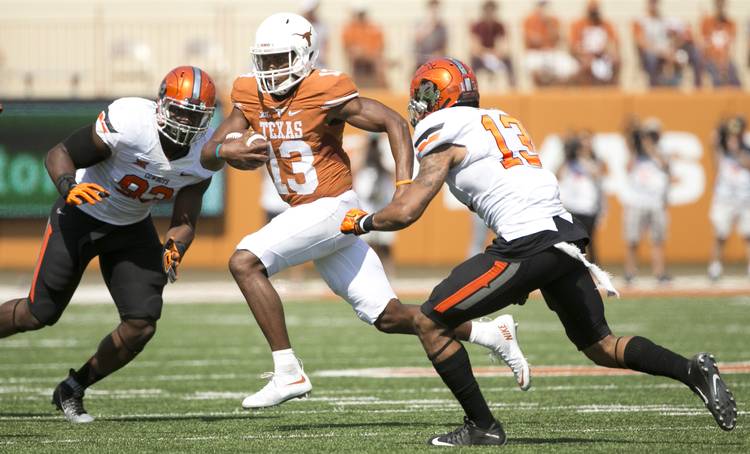 Malik Jefferson, Peter Jinkens and Anthony Wheeler figure to be exhausted after chasing Boykin. The reigning Big 12 player of the year will move all around until he finds an open receiver. And if he doesn’t find one, he’ll take off running. Wheeler, a high school teammate of Jinkens’ at Dallas Skyline, is playing in place of Edwin Freeman, who is expected to miss several games with a shoulder injury. Defensive coordinator Vance Bedford says a team will lose if it misses more than 10 tackles. Boykin makes people miss.

Gaffes by the kicker and punter cost Texas a chance at winning against Cal and Oklahoma State. Just think: The Longhorns could be 3-1 instead of 1-3. Dickson, the Australian freshman, inexplicably dropped a snap that led to OSU’s winning field goal. No reason has been given for the muff, so chalk it up to nerves. With a defense that’s struggling and an offense still trying to forge an identity, special teams have to be at least adequate. And when they’re not, well, 1-3 happens.

After his first tour through the pass-happy Big 12, Longhorns coach Charlie Strong knew he had to upgrade his secondary. He went out and signed two of the state’s top corners, Holton HIll and Kris Boyd, and packaged them with Florida import Davante Davis. They have gotten increased playing time each week and now encounter a demanding challenge in Josh Doctson, a physical specimen Bedford likened to Superman. Hill, who was injured for a big chunk of training camp, has been coming on lately and may get the first crack at Doctson.

JERROD HEARD VS. THE ROAD

Three of this season’s first four games were played at Royal-Memorial Stadium. The lone road game, the season-opening clunker at Notre Dame, didn’t go so well. This will be Heard’s first road start, and although it’ll come near his hometown of Denton, the freshman quarterback won’t have the backing of the crowd. Then again, home field hasn’t meant much — the Horns have lost two in a row in Austin and were flagged for 16 penalties against OSU.

If not now, when? This would seem to be a perfect time for Texas to crank up its sluggish run game, as TCU is without six defensive starters. Not even Gary Patterson, an excellent defensive mind, can overcome that amount of attrition. TCU’s opponents are averaging about 170 yards on the ground along with 10 touchdowns, but the return of senior tackle Davion Pierson should close some running lanes. Texas has injury concerns of its own, as right tackle Kent Perkins is questionable with a knee injury.