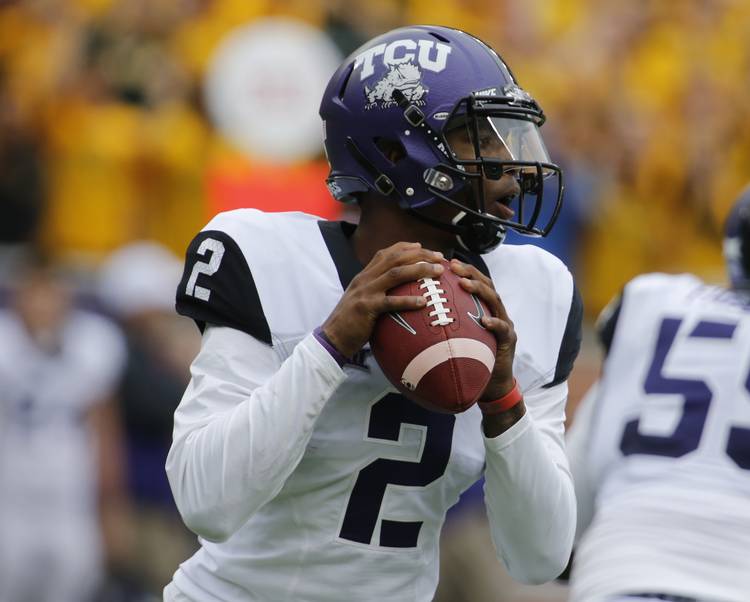 On Saturday against TCU, the eyes of Texas will be upon …

Boykin enters the day with the third highest Heisman odds, trailing SEC running backs Leonard Fournette (LSU) and Nick Chubb (Georgia). Speaking this week on Boykin’s evolution, Texas DC Vance Bedford said that a year ago Boykin scrambled to run and that now he scrambles to pass. The numbers show progress, as Boykin has stepped it up in efficiency (145 to 171), completion percentage (61 to 64) and passing yards per game (300 to 367). There are questions about TCU’s playoff résumé, but none of them have to do with Boykin and the offense.

He has six touchdowns in the past seven games, a streak that began in a rout at Texas last Thanksgiving. His 35 receptions rank second in the country; half of them came last week at Texas Tech when Doctson pulled in three of his six touchdowns. At 6 feet, 3 inches, he’s a matchup nightmare for smaller corners, which is partially why rangy freshmen Holton Hill, Kris Boyd and Davante Davis are expected to play more.  NFL mock drafts have Doctson, once an unranked recruit from Mansfield Legacy, going in the first round of the upcoming draft.

The 300-pounder, who has 31 career starts, made his season debut last week after missing three games with concussion symptoms. He’ll be Texas’ biggest obstacle to establishing a ground game with backs Johnathan Gray and D’Onta Foreman, but even with Pierson back the Horned Frogs are still without six defensive starters. In last year’s meeting, Pierson registered a tackle for loss and a pass breakup.

Staff takes, Texas vs. TCU: Do the Horns have enough for a shootout?