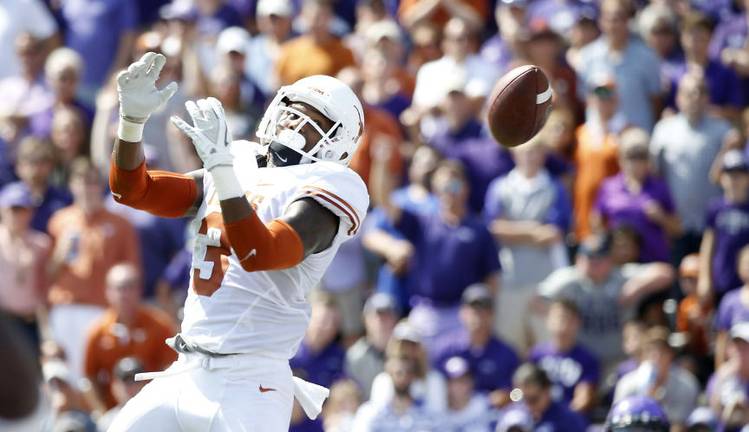 OCTOBER 3, 2015 - Texas #3 Armanti Foreman can't quite get a handle on the ball during the second quarter of an NCAA game held at Amon G Carter Stadium in Fort Worth, Tx., on Saturday, October 3, 2015. (RODOLFO GONZALEZ / AMERICAN-STATESMAN)

That’s a joke, right? TCU’s 30-0 lead after just 15 minutes marked the worst quarter in school history since Houston put up 31 points on the Longhorns in the fourth quarter of a 60-40 win in 1987.

Take your pick between Horned Frogs receiver Josh Doctson’s terrific catch on a fade route for his first touchdown or his catch of a pass from former Lake Travis star Shaun Nixon, both in the first quarter.

That’s a tough call when a team’s kicker misses both field goal tries in the first half, a snapper sails the ball over the punter’s head, the punter shanks one 22 yards and the kicker on a free kick boots the ball out of bounds to give TCU the ball at midfield. Let’s change this category to “Worst special teams mistakes.”

Sonny Meacham, TCU’s offensive coordinator, dialed up a well-conceived play for a touchdown when Trevone Boykin found wide receiver KaVontae Turpin out of the backfield and linebacker Peter Jinkens was no match for him. Turpin ran 50 yards untouched into the end zone.

Texas had a number of them, but deep snapper Kyle Ashby’s snap about 10 feet over the head of punter Michael Dickson sailed into the end zone for a safety.

Sorry, but it was Ashby, who failed to recover a fumbled punt by TCU near midfield.

That honor goes to D’Onta Foreman, who runs hard and stepped off 112 yards. Johnathan Gray had 55.

Steve Patterson didn’t love rubbing elbows with the media on gamedays, but new Texas athletic director Mike Perrin held court with all Longhorns reporters an hour before kickoff. He didn’t have any blockbuster news, but said of the negotiations with Nike and Under Armour, “I’d like to get that off my plate.” He also was wearing Nike shoes and said, perhaps for a reason, “They’re very comfortable.”

Offensive tackle Kent Perkins, who injured a knee in the fourth quarter against Oklahoma State, didn’t make the trip and was replaced by senior Marcus Hutchins. Hutchins, you might recall, was called out by teammate Sedrick Flowers for a serious “lack of preparation” for the OSU game. Texas tried four players at Perkins’ position during the week and were highly concerned about protecting Heard on the perimeter.