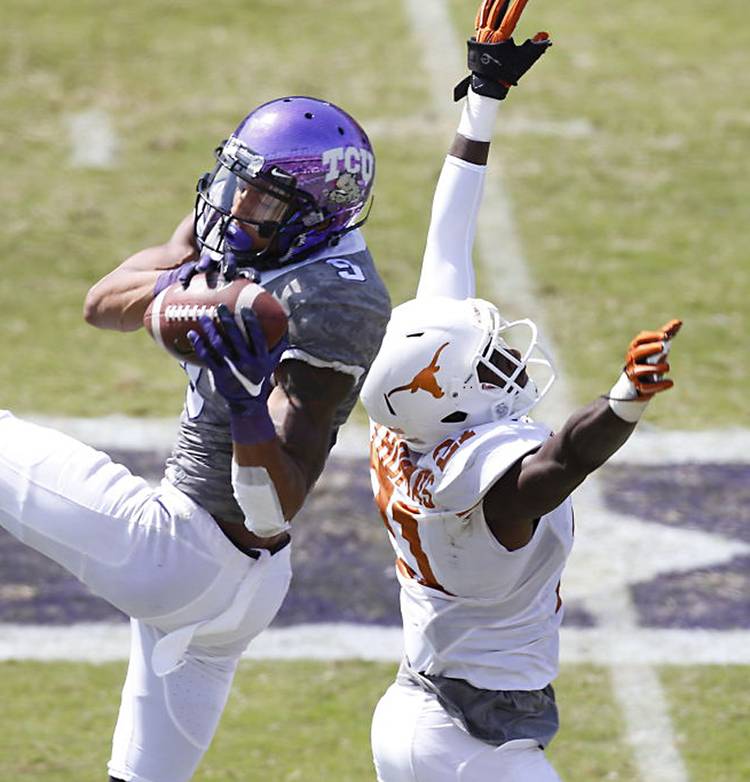 OCTOBER 3, 2015 - TCU #9 Josh Doctson brings in a pass during the third quarter of an NCAA game held at Amon G Carter Stadium in Fort Worth, Tx., on Saturday, October 3, 2015. (RODOLFO GONZALEZ / AMERICAN-STATESMAN)

How smart were TCU schedule makers for placing Homecoming for the Texas game?

A lot was said of that big point spread (18 points) to start the week. Turns out, the Horned Frogs not only covered, they blanketed.

The Longhorns, 0-3 in their last 11 a.m. starts, certainly looked sleepy in Fort Worth. It was all TCU, all day at Amon G. Carter Stadium in the blowout.

Jerrod Heard was held in check by the second straight Big 12 defense (8 of 20 for 48 yards, 12 carries for 23 yards, sacked three times). D’Onta Foreman rushed for 112 yards on 18 carries. No Texas receiver had more than three catches, and no one had more than 36 receiving yards.

Charlie Strong drops to 1-8 vs. ranked teams as Texas’ head coach. His 10th ranked opponent will be Oklahoma next Saturday.

The first quarter was a who’s who of lowlights for the Longhorns. Daje Johnson fumbled after a catch. That led to TCU’s first touchdown. Holton Hill got flagged for interference on Josh Doctson. A punt snap — go figure — went awry when Kyle Ashby’s effort sailed over Michael Dickson for a safety out of the endzone. Dickson, he of the infamous botched punt against Oklahoma State, shanked a 22-yard effort early. Hill got burned by Doctson again, this time for a touchdown. Taylor Doyle blew a block that resulted in a sack that forced a fumble (though the play was called back). Trevone Boykin threw three touchdowns. Heck, even Lake Travis product Shaun Nixon — a running back — threw for a TD. It was 30-0 at the merciful end.

As frenetic as the first quarter was, the second quarter slowed down. Either TCU’s offense slipped a gear or Texas’ defense turned it up a notch. Most likely, it was something in between those two. It was largely the Foreman & Foreman quarter for the Longhorns, as twins D’Onta and Armanti featured prominently on a long drive that started inside Texas’ 5. Nick Rose missed not once, but twice (from 39 and 40 yards). That second miss spoiled a seven-minute, 19-play drive. TCU then took 36 seconds to score. That just about summed up the game.

The final two quarters were back-and-forth stalled drives with the occasional Boykin touchdown pass. By the end of the third, Texas subbed Swoopes in for Heard. Late in the game, it looks like freshman linebacker Breckyn Hager suffered a major leg injury. He refused to get on the cart, however, and was helped off.

Special teams, again, struggled. There was the missed field goal and the safety off the bad punt snap. Dickson had a 22-yard kick. When Daje Johnson got hurt early, it meant Duke Thomas had to return punts. In the second quarter, he failed to make a fair catch and it made Texas start a drive inside its 5.

Injury updates: Kent Perkins, who hurt his knee last week, did not play. Daje Johnson was shaken up after getting hit on his first catch (he fumbled on the play). It was called a head injury. And freshman linebacker Breckyn Hager left the field in the fourth. Early speculaton on TV was that it may be a broken leg.TCU left tackle Halapoulivaati Vaitai hobbled off in the third.