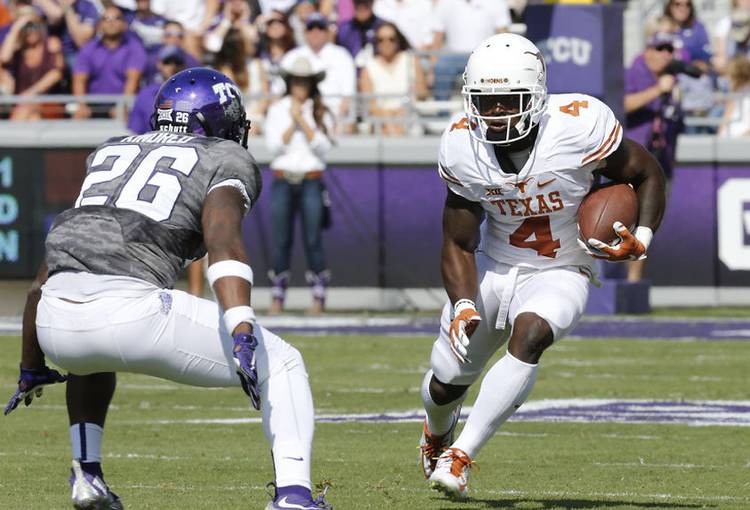 OCTOBER 3, 2015 - Texas and TCU Texas #4 Daje Johnson looks to get past TCU #26 Derrick kindred during the first quarter of an NCAA game held at Amon G Carter Stadium in Fort Worth, Tx., on Saturday, October 3, 2015. (RODOLFO GONZALEZ / AMERICAN-STATESMAN)

FORT WORTH — Almost immediately, TCU took off the head of Texas’ offense.

Daje Johnson, the Longhorns’ most dynamic playmaker, made nary an impact in Saturday’s loss after he suffered a head injury on the opening drive. He did not return and apparently watched his team’s embarrassing 50-7 defeat from somewhere other than the sideline.

“He didn’t know where he was,” Texas coach Charlie Strong said.

The injury happened on Texas’ second play when Johnson was twisted around by Derrick Kindred and fumbled. The short field led to the first of four TCU touchdowns in the quarter.

Play-caller Jay Norvell said Johnson’s injury called for a major alteration to the game plan. Hearing Norvell say that stirred up reminders of the 2013 debacle against BYU, when the offense flatlined after Johnson was injured.

Perrin speaks: Interim athletic director Mike Perrin called the lawsuit against offensive line coach Joe Wickline “a distraction,” but would not say if Texas plans to settle with Oklahoma State to make it go away.

Perrin, a personal injury lawyer, spoke with reporters before the game and said that he has requested documents related to the case to get up to speed. He declined comment when asked if he’d be comfortable with quarterback Tyrone Swoopes testifying, which Oklahoma State’s legal team has requested.

The case is set to go to trial on March 8 in Payne County, Okla. OSU is seeking about $600,000 from Wickline, claiming that he left OSU for a lateral position at Texas without play-calling responsibilities.

As for athletic apparel negotiations, Perrin said, “I’d like to get that off my plate.” The university is soon expected to entertain pitches from Under Armour and Nike, with whom Texas has had a partnership since 2000, but did not re-sign with by the end of an exclusive negotiating window that expired last week.

Swoopes package: During the week, Norvell hinted that additional wrinkles would be unveiled for the package where Swoopes comes in as a change-of-pace quarterback. Be it because of the score or something else, the package was shelved until the third quarter when Swoopes entered for one play and ran for eight yards.

Swoopes replaced Jerrod Heard and played the entire fourth quarter in a traditional quarterback role and authored a 93-yard  TD drive against TCU’s reserves. Texas avoided being shut out for the second time under Strong when Lorenzo Joe laid out in the end zone for a bullet from Swoopes.

Short yards: Texas has been outscored 88-10 in two road games. … D’Onta Foreman ran for 112 yards on 18 carries, giving Texas its first 100-yard effort by a running back since West Virginia last year. … Breckyn Hager left the game late with a leg injury and had to be carted to the locker room. … Freshman safety DeShon Elliott dressed in uniform for the first time, but did not play. … Defensive linemen Paul Boyette and Bryce Cottrell started over Tank Jackson and Shiro Davis, respectively.

Texas vs. TCU: Third and Longhorns

TCU 50, Texas 7: Horns won the coin toss and it was downhill from there