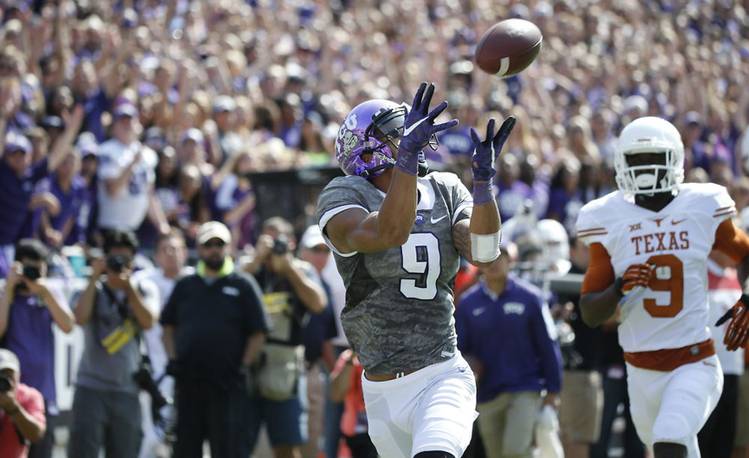 OCTOBER 3, 2015 - TCU #9 Josh Doctson brings in the ball during the first quarter of an NCAA game held at Amon G Carter Stadium in Fort Worth, Tx., on Saturday, October 3, 2015. (RODOLFO GONZALEZ / AMERICAN-STATESMAN)

WHY TEXAS (1-4, 0-2) LOST: The easiest, most honest reason? The fourth-ranked Horned Frogs are simply at another level than the Longhorns’. For the second straight game, Jerrod Heard was held in check — 71 total yards, a far cry from his record-breaking night vs. Rice — and Tyrone Swoopes ended up quarterbacking the out-of-reach fourth quarter. TCU’s Big Three of quarterback Trevone Boykin, receiver Josh Doctson and running back Aaron Green were as exciting as advertised. The defense never made Boykin hurry and the freshmen cornerbacks were schooled. Oh, and the special teams. Two missed field goals, a bad punt snap for a safety, an out-of-bounds kickoff. When will it end?

WHY TCU (5-0, 2-0) WON: The easiest, most honest reason? The fourth-ranked Horned Frogs are that much better than the Longhorns. It didn’t help that TCU probably felt it had something to prove after last week’s near whiff in Lubbock last week. Boykin, Doctson and Green combined for 531 yards and seven touchdowns. Even running back Shaun Nixon threw a touchdown pass. Like Oklahoma State, TCU solved Heard, who found yardage hard to come by. And there were enough Longhorns miscues to take advantage of.

THE EYES OF TEXAS: … were on three specific Horned Frogs — Boykin, the Heisman Trophy candidate and reigning Big 12 player of the year; Doctson, who had caught six touchdowns in his last seven games,  a streak that began last Thanksgiving against Texas; and defensive tackle Davion Pierson, the veteran run stopper who missed TCU’s first three game with a concussion. How’d they do? Boykin was outstanding (20 of 35 for 332 yards and five touchdowns), Doctson sure looked like a future No. 1 draft pick (seven catches for 129 yards and 2 TDs) and Pierson, with four tackles, was quiet.

Offense — D’Onta Foreman, who rushed for 112 yards, looked like the bigger, faster, more powerful and more productive back.

Cheers …
(1) TCU’s playoff chances: The Horned Frogs look better at this point than they did in 2014.
(2) Boykins’ Heisman chances: And he broke Andy Dalton’s career TD passes record at TCU, too.
(3) Tyrone Swoopes: Another first down conversion off the bench, plus extended play in the fourth quarter.

Jeers …
(1) Special teams: If this were the NFL, don’t you feel like Nick Rose and Michael Dickson would already be on waivers?
(2) The stars of yesterday: Where have you gone, Jerrod Heard, Malik Jefferson and John Burt?
(3) Injuries: Kent Perkins stayed in Austin, Daje Johnson left after two plays and Breckyn Hager may be done for 2015.

Texcetera: The Longhorns still control this series (62-23-1 all-time vs. their old SWC rivals), but the Horned Frogs have won three of the last four. … D’Onta Foreman’s 112 rushing yards were a career high and it was Texas’ first 100-yard game by a running back since last year’s win over West Virginia. That was a stretch of seven games. … On what was an otherwise rough afternoon for Texas corners, Duke Thomas had a pair of pass breakups and Holton Hill posted a career-high seven tackles. … The Longhorns have lost three 11 a.m. kickoff games in a row. Next Saturday’s OU game is at 11 a.m., too.

On deck: No. 15 Oklahoma (11 a.m. Saturday, Cotton Bowl, Dallas). Are the Longhorns really going to start this season 1-5? The only way to prevent it is an upset of the Sooners, who pasted nationally-ranked West Virginia on Saturday. The Sooners are rolling. The Horns are not. Last year: Oklahoma 31, Texas 26.

Texas vs. TCU: Horns up, Horns down