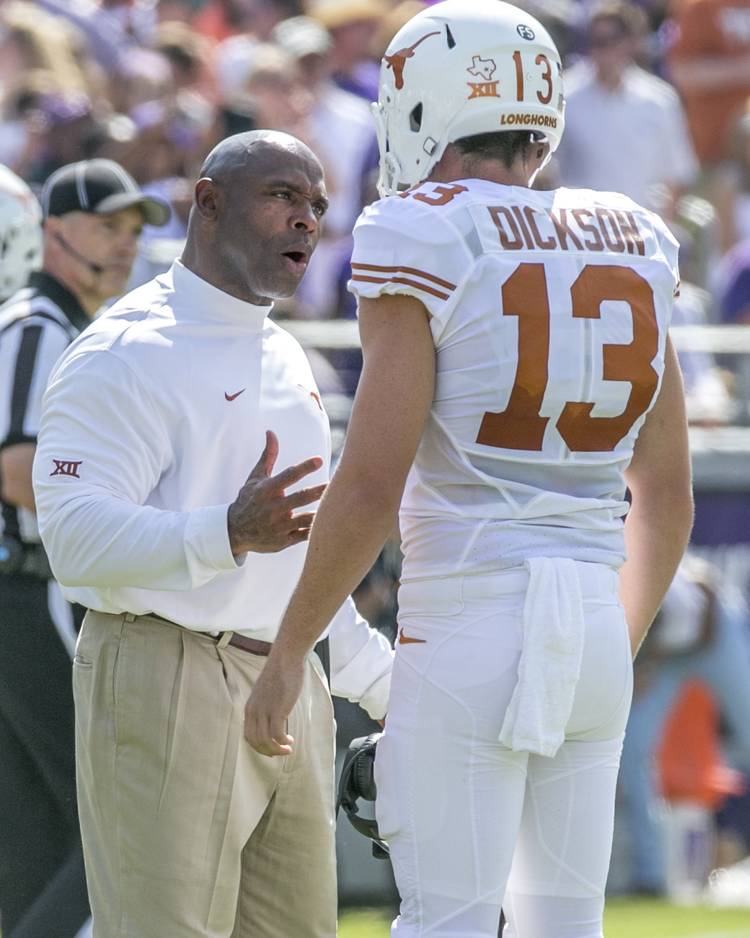 1. Heading for a long day

If someone was to come up with a list of the most irreplaceable players on Texas, Daje Johnson would be near the top, maybe even first overall. On a team bereft of home run hitters, the senior speedster possesses flash. So when he was lost with a head injury on the second play from scrimmage, Texas’ chances of competing with the nation’s fourth-ranked team went from slim to none. It appeared Johnson was knocked unconscious on a helmet collision by Nick Orr, whose father Terry was a Longhorns fullback in the 1980s. Johnson did not return, casting doubt on whether he’ll play against Oklahoma this Saturday.

2. A special sort of bad

Did special teams members challenge each other to a game of “anything you can do, I can do worse?” Kyle Ashby’s punt snap over the head of Michael Dickson for a safety meant Texas had to kick off from the 20. ESPN’s Chris Spielman warned viewers that the game “could get out of hand.” He was right. Nick Rose’s kick was lame, bouncing out of bounds, and TCU, whose offense needs no assistance, got to start a drive at midfield. Five plays later, Trevone Boykin and Josh Doctson hooked up for a 16-0 lead.

Last week, defensive coordinator Vance Bedford said Texas was close to a breakthrough, but added that “close gets you beat.” Armanti Foreman was close to pulling in a catch for 23 yards, and he would have had he been able to drag a foot in bounds on a pretty sideline fade on first down. Three plays later, Texas was punting.

This time, it was Dickson’s turn to screw up. Following Ashby’s high snap and Rose’s errant kickoff, Dickson shanked a 22-yard punt out of bounds. That led to the second of four TD catches by KaVontae Turpin, a lightly-recruited freshman from Louisiana who juked safety P.J. Locke for the 49-yard score. But according to Spielman, senior Duke Thomas, not Locke, was to blame for “vacating his responsibility” on Turpin’s wheel route. Bedford may have saw things differently. As he was instructing Thomas, Locke tried to sneak by, but was pulled back. “Don’t walk away!” Bedford barked.

If the deep snapper keeps getting mentioned, that’s normally a concern. For the second time, Ashby came up short, this time when he couldn’t corral a botched punt return by Turpin. Ashby was in position to make the play, but when a pile of players was sorted out, TCU’s  Ridwan Issahaku, not Ashby, had possession. Ashby covered his head in disgust. TCU went ahead 30-0 a short while later on Doctson’s second TD — a 29-yarder from Shaun Nixon, a redshirt freshman tailback from Lake Travis.

Then as now, Oklahoma wants to pound weakened Texas