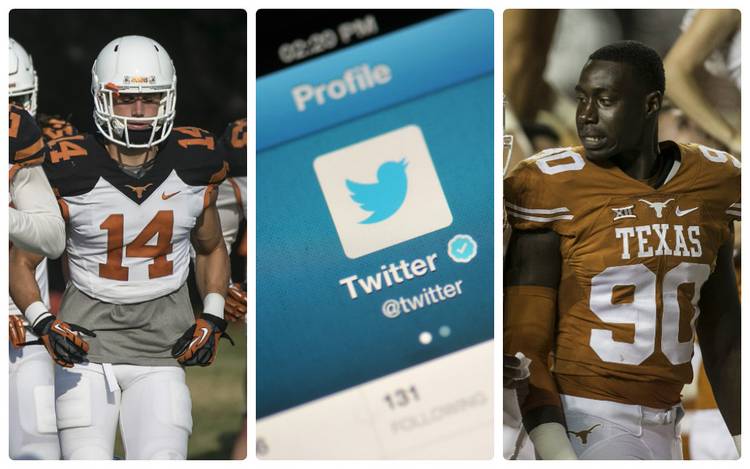 The Longhorns were all a-Twitter on Monday with back-and-forth tweets between Texas safety Dylan Haines (left) and defensive end Charles Omenihu (right).

The Texas coached opened his Monday press conference by saying, “This is the week we get things going, where we get our confidence back.”

Strong said he called two team meetings after Saturday’s 43-point blowout to TCU. He accepted full blame for UT’s 1-4 start and made it clear he’ll face any consequences.

“I never will ever say it was coach (Mack) Brown’s fault,” Strong said. “It wasn’t ever his fault. It is on me.”

Strong appears to be squarely focused on the 10th-ranked Sooners, as he should be. As for the players, well, things appear to be in complete disarray, if social media is any gauge.

One week after guard Sedrick Flowers called out a teammate, junior safety Dylan Haines criticized the freshmen for not preparing well enough. Nobody realized it at the time, but his comments set off a raging inferno inside UT’s locker room.

“They just want to go out and play the game on Saturday.,” Haines said of the freshmen. “They don’t want to put in the work on Sunday and Tuesday, Wednesday, Thursday and Friday.

“You can just kind of go through the motions in practice, or you can go out there and practice,” Haines added. “We’re trying to get where everyone — 100 percent of the people — on the team are just going out there stealing reps in practice. Just get as much done as you can.”

“People get in front of the cameras and just talk they heads off,” Omenihu added in a subsequent tweet that was later deleted. “Always remember think before you speak.”

Sophomore receiver Armanti Foreman tweeted, “I walk around campus every day, no body guard, no security! If you have something to say please say it (to) me and stop hiding behind Twitter!”

“We’re supposed to be a team, but instead we’re bashing each other,” McNeal said. “If you don’t want to be here at Texas then kick rocks. We haven’t won ANYTHING to have people calling out others.”

Senior cornerback Duke Thomas just shook his head at the 140-character nonsense. The 21-year-old, who referred to the freshmen as kids, said all the noise was a reflection of how they think. “It’s hard to stop them from doing what they’ve always done,” Thomas said.

Thomas said he talked with freshman cornerback Kris Boyd, who retweeted a message at halftime of the TCU game. A Texas A&M fan posted a message implying Boyd and freshman linebacker Malik Jefferson should transfer to College Station. The Longhorns were being shut out at the break, 37-0.

Junior safety Adrian Colbert saw Boyd on his phone in the locker room and told him to put it away, Thomas said.

Strong said Boyd apologized to the team during Saturday night’s team meeting called after the Horns landed back in Austin. Strong said players are not supposed to be on their cell phones during team activities, much less during games.

“If you want to tell everyone you’re at the grocery store picking up Twinkies, have at it,” Stoops said Monday.

Strong said Boyd would face internal discipline, but that he would play against OU.

“It’s only a matter of time till one of the kids be on the their phone, tweet the wrong thing, say the wrong thing on Facebook, Snapchat or — God forbid — even film something at halftime,” Thomas said. “You just gotta teach ‘em.”

And yet two days after UT’s team meeting, social media mayhem was again front and center. Reports on Omenihu’s and Foreman’s tweets went viral, and national pundits were asking again whether Strong is still in control.

“That’s the thing the coaches stress as soon as you come here: Your actions have consequences,” senior center Taylor Doyle said. “Everything you do reflects on you, yourself, your team and your family.”

Thomas said, “We have to teach them they can’t be on social media all the time. Everything isn’t for the public to hear.”

Defensive tackle Paul Boyette joked that, unlike Boyd, he didn’t have cell service.

“I’m married. I don’t be on social media,” Boyette said. “I spend time with my wife.”

Then as now, Oklahoma wants to pound weakened Texas