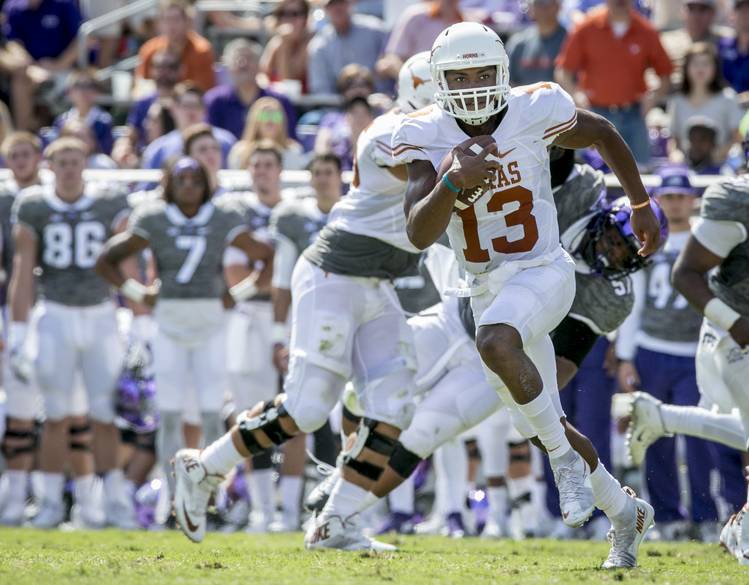 Jerrod Heard delivered a message to his social-media crazed teammates.

With his mouth, not his thumbs.

A day after several freshmen responded angrily via Twitter to claims by a teammate that they weren’t working hard enough, Heard said he’ll make sure it doesn’t happen again.

And the quarterback is willing to break one of Charlie Strong’s five core values — no stealing — to make sure it gets done.

A refresher: At Monday’s press conference, junior safety Dylan Haines attributed some of Texas’ problems to the team’s freshmen wanting to play on Saturdays but not work hard on the other days. Haines’ comments struck a nerve almost immediately. Freshman defensive end Charles Omenihu fired back, “People get in front of the cameras and just talk they heads off. Always remember think before you speak.“ Freshman tight end DeAndre McNeal posted a lengthy response that included “us FRESHMAN are go getters.”

The exchange was troubling, as coach Charlie Strong arranged not one but two team meetings in the wake of Saturday’s 50-7 loss at TCU that dropped the Horns to 1-4.

Heard, who will make his fifth start against Oklahoma this Saturday, said it’s on him as a team leader to calm the locker room.

“I’ve taken that role as a leader to tell those guys to chill out, that you don’t have to do that stuff to get your point across,” Heard said.

Heard downplayed the conflict, suggesting the freshmen were “just bored.”

“They were looking for favorites and retweets,” he said.

Tall odds: If Heard is to author an upset over the No. 10 Sooners, he very well might have to do it without his top playmaker and one of his top blockers.

“Daje is day-to-day,” Norvell said. “He’s not totally back yet. We’re trying to get him back. We’re hopeful he’ll be ready to play by the weekend.”

Johnson suffered an apparent concussion on Texas’ second offensive play against TCU and did not return. Perkins did not travel to Fort Worth and was replaced in the starting lineup by Marcus Hutchins.

“He’s still healing up,” Norvell said. “We’ll see. We got a couple of different guys that are rotating there. I feel confident we’ll play well up front.”

View from both sides: Norvell, who coached receivers at Oklahoma the past seven seasons, called the Red River Showdown “by far my favorite game.” That’s high praise for someone who has coached for both a Super Bowl and a national championship.

RHP Morgan Cooper back on the mound after Tommy John surgery

At Denton Guyer, Jerrod Heard had plenty of talent, ‘juice’