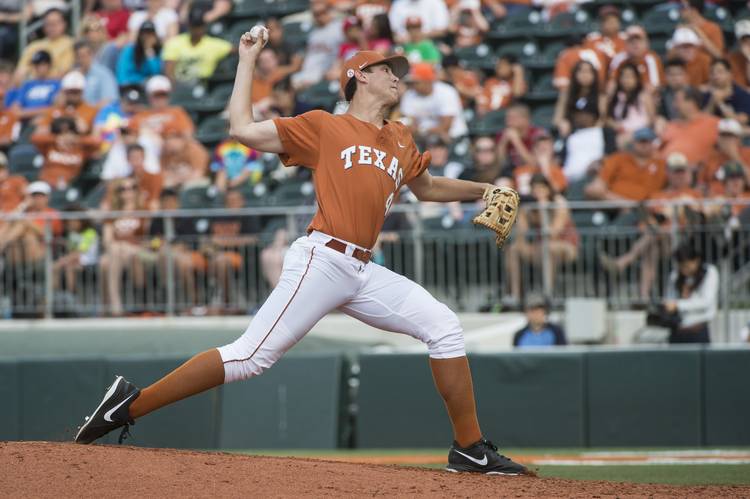 In the wake of a disappointing season, some observers expect Texas baseball to make an emphatic rebound because of a pitching staff that returns seven contributors who started a game in 2015.

Morgan Cooper is back.

The right-hander is progressing in bullpen sessions this fall, the surest sign he is on the right path after undergoing Tommy John surgery 11 months ago. He threw 35 pitches on Sunday, firing nothing but fastballs for the time being.

“It went well,” pitching coach Skip Johnson said at a media gathering on Tuesday. “The fastball command was there.”

It’s unlikely that Cooper will throw in one of three instrasquad games this month, but Johnson has not ruled out putting him through a simulated start.

It was around this time a year ago that Johnson feared the worst and shut Cooper down for fall ball. His elbow didn’t improve, forcing reconstructive surgery in November. The issue first arose during Cooper’s senior season at Jarrell, but it was not as significant as it would eventually get; he soldiered through an excellent freshman season and posted a 2.89 ERA in 56 innings. He made 29 appearances (one start) and kept things close with 4 2/3 innings of one-run ball in a season-ending loss to Vanderbilt in the College World Series.

“Over the summer, the elbow got worse,” Cooper said. “It got to the point where I couldn’t take it anymore.”

Once he’s back full-go, Cooper will be on track for a spot in the starting rotation where competition is heavy from returners and newcomers. Sophomores Connor Mayes and Kyle Johnston have settled in as starters, according to Johnson, after getting tried at various spots last year. Questions about their ability to pitch a weekend series were answered at the Big 12 tournament when Mayes worked a complete game shutout and Mayes logged six innings in a win over Oklahoma State in the championship game.

An incoming class has Johnson gushing.

“The freshmen have shocked me,” he said. “Not surprised me, but shocked me.”

Johnson said Clemens, who was moved to first base late in the season because of an elbow injury, consistently reached 89-91 miles per hour in a recent bullpen session. And he added that Chad Hollingsworth (3-5, 5.75) is out until April or May with a shoulder injury that bothered him throughout last year and kept him out of the postseason mix.

“We’re gonna be deep,” Cooper said. “We have a lot of guys that would be role guys at other places and we’ve got them all here. What more could you want? There’s no reason we shouldn’t have the best pitching staff in the country.”