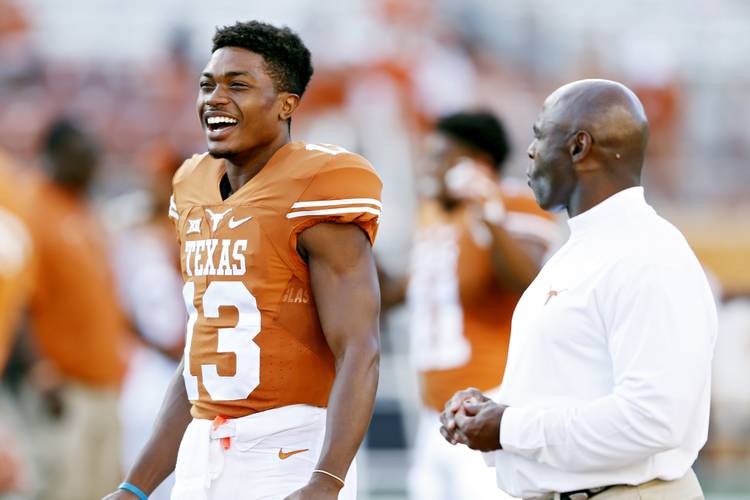 Watson and Norvell wanted info on one in particular — quarterback Jerrod Heard, purveyor of “juice.”

“They walked in, closed the door and asked us, ‘OK, how did you guys make it work with Jerrod?’” said Lee Vallejo, Guyer’s quarterbacks coach.

Heard accounted for more than 11,000 total yards and 135 touchdowns in his three years as a starter. But, but, but, the UT coaches thought. Heard just didn’t seem to practice all that well in Austin.

“It was the same thing here, really,” Walsh said. At Guyer’s practices, defenders pulled up on the quarterback. Plays were whistled dead when he took off scrambling, just as it is at Longhorns practices. Just as it is practically everywhere.

“Then in his junior year, he definitely started coming into his own during the regular season,” Walsh recalled. “Then come playoff time, he completely took games over and put this program on his back to go win those rings.”

Oh, the folks at Guyer were adamant: Heard has “juice,” alright.

It certainly seemed that way against California, when Heard amassed 527 total yards in only his second career start. Vince Young is now second in the UT history books because of it. But Heard has struggled the past two weeks against Oklahoma State and TCU.

Now comes the quarterback’s first Red River Showdown. Oklahoma, ranked No. 10 in the country, will look to squeeze out whatever juice remains in Texas’ season.

“I love it. I love it when OU fans are screaming at me, cursing me, calling me names. I love that,” said Heard, who was on the sideline last season watching Tyrone Swoopes start against OU. “When I step out there, I just kind of blank it out and just play.

“When we score, it’s gonna be like a party in the end zone.”

Texas coach Charlie Strong practically laughed in Heard’s face when he gave the starting nod to his redshirt freshman against Rice in Week 2. “Watch me go out here and get these boys,” Heard told Strong. And he did. Heard ran for 96 yards and threw for 120 more in what stands as UT’s only win this season.

“When he took off, you knew something exciting was going to happen,” Strong said afterward. “And that’s what you like about him.”

That kind of performance gave UT fans hope, just like it did at Guyer.

Mike Carrillo, a three-year starting linebacker, said he watched Heard in high school and was amazed. “I saw him making plays and thought, ‘I want to be a guy like him, a guy that people want to follow,’” Carrillo said.

Heard’s senior season at Guyer could have been derailed by what happened before it really began. His longtime friend and teammate, 18-year-old Nate Maki, was shot and killed in a hunting accident the weekend after the team’s season opener.

Carrillo’s locker was right next to Maki’s. Carrillo wore No. 32; Maki was 33. “Lot of emotions in the air,” Carrillo said.

Heard was forced into a leadership role during a tragic moment, Walsh said. The quarterback led students in prayer and had no choice but to lead them on the field, too.

“He made a lot of those guys just play better than we really were,” Vallejo said of Heard. The two still communicate frequently.

“I remember our tight ends coming off the field saying, ‘Coach, I’m blocking the hell out of D-Ro.’ No, you really weren’t. They thought they were. He just brought that kind of stuff out of those kids.”

Guyer trainer Janna Roper recalled Heard was always concerned about letting others down. Texas fans got a glimpse of that after last Saturday’s 50-7 TCU loss, when Heard tweeted, “I’m sorry.”

“When he was off the field, he was hugs, yes ma’ams, can you and will you, please,” Roper said. “Then he stepped on the field and just took control. So you got to see both sides of him.

Heard’s reputation at Guyer was so big, even those who didn’t get to play with him wanted to be around him. Shawn Robinson transferred from Saginaw Chisholm Trail in the spring semester of 2014 and replaced Heard as Guyer’s starter.

That’s the dude who now wants to lead Texas. Not just against OU, but for years to come.

As Heard said Tuesday after practice, “I still got the juice.”