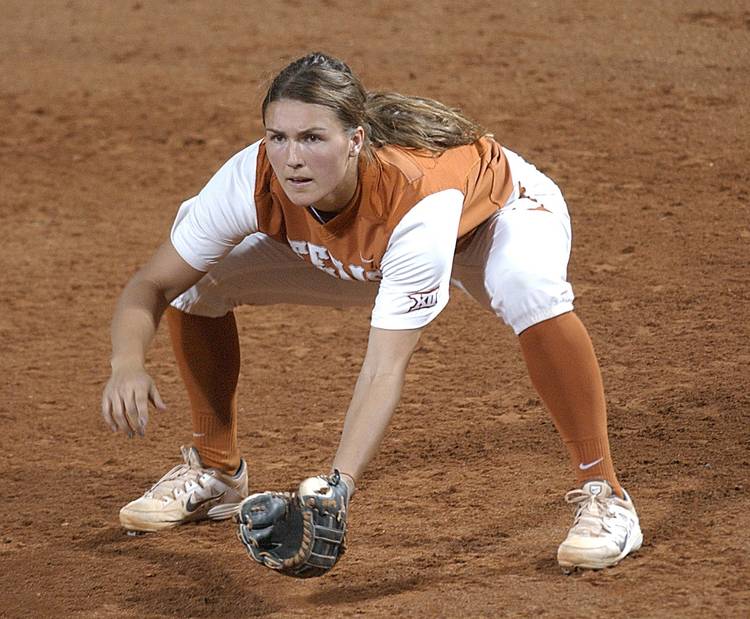 Texas' Randel Leahy had an RBI single to send Sunday's game into extra innings, but the Longhorns lost to Oklahoma. MICHAEL ADAMS/ ACN

Reagan Hathaway isn’t in Kansas anymore, but she’s fine with it.

Austin “is everything that I expected it to be,” Texas’ freshman outfielder from Lenexa, Kan., said. “There’s a lot to do here, as to where in Kansas, there’s not really anything to do at all. I love all the cool restaurants and weird places you can go. I’m having so much fun.”

Hathaway might be enjoying everything that Austin has to offer outside of the classroom, but she was all business at McCombs Field on Thursday night in Texas’ 13-0 win over Temple College.

Hathaway was a star player at Olathe Northwest High School, about 20 miles southwest of Kansas City, where she was a two-time National Fastpitch Coaches Association high school All-American and the 2014 NFCA national high school catcher of the year.

She was one of several newcomers who shined in the Longhorns’ third fall game. Hathaway had a sacrifice bunt and a hard single.

“I’m surrounded by all really good players, so it’s kind of fun to play with people at the same level,” Hathaway said. “It’s humbling, but I don’t feel any less of a player than what I was in high school.”

Fellow newcomer Paige von Sprecken was 1 for 1 at the plate and combined with junior Tiarra Davis and sophomore Kristen Clark to toss a one-hit shutout.

The path of the sophomore from Yorba Linda, Calif., to Austin was more unusual. Von Sprecken transferred from the University of San Diego.

“I just didn’t feel like USD was the right fit for me,” von Sprecken said. “I started looking at colleges, and my mom suggested I look at Texas. So I came to visit the school and just fell in love with the campus and the environment. I started talking to coach (Connie) Clark, and everything just fell into place. I’m so thankful for the opportunity she’s given me.”

Clark said one thing she’s noticed is how quickly Texas’ five newcomers, who include transfer Celina Felix and freshmen Bekah Alcozer and Christina Bardwell, have meshed with the returning players.

“What I like the most, so far, is how they fit in in the clubhouse,” she said. “Paige and Reagan are two that just fell right into everything, and Celina as well. That bodes well for the spring and the chemistry piece to the puzzle.”

“I was so nervous throughout the summer coming here and meeting the girls,” she said. “From the moment I got here, the girls have been great. I was not expecting it to be this welcoming. I’ve never been on a team that has been this welcoming.”

‘Why should OU take us serious? Because we’re Texas’