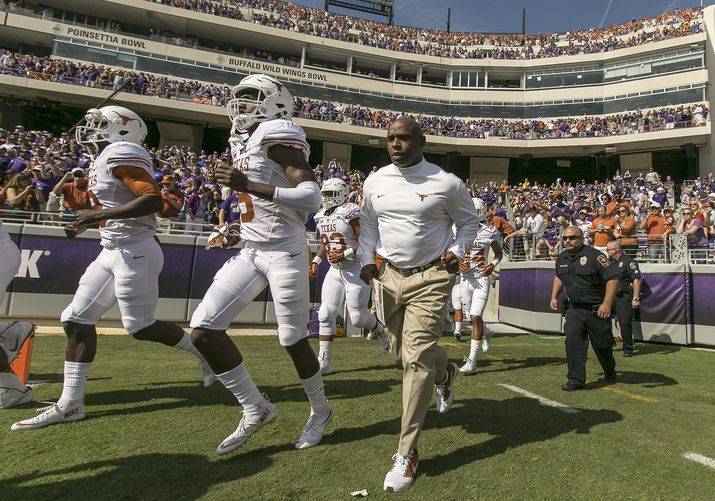 1. Will Bob Stoops show mercy on Texas and Charlie Strong?

Stoops has administered some lickings in this series — 63-14 (2000), 65-13 (2003), 55-17 (2011) and 63-21 (2012). Those all came against Strong’s predecessor, Mack Brown. By all appearances, Stoops is a Strong admirer, as both climbed the coaching ranks on defense and had stings as Florida’s coordinator. This past offseason, the two chatted and Stoops convinced Strong to hire Jay Norvell, whom Stoops had just fired as his receivers coach. OU is favored by 17 points. How bad this gets might depend on Stoops’ compassion.

2. Will D’Onta Foreman continue to take carries from Johnathan Gray?

Foreman was the lone bright spot in last week’s debacle at TCU, gaining 112 yards on 18 carries for his first 100-yard game. Gray had 55 yards on 15 carries. Strong and Norvell were noncommittal this week on how they’ll split carries or whether Foreman could supplant Gray as the starter. Through five games, Foreman has outgained Gray 211-204 on nine fewer carries.

3. Which Nick will kick?

Nick Rose is running out of chances after he missed two field goals last week, slumping to 4 of 7 on the season. Strong said the job is open, which is an invitation for Nick Jordan to reclaim the position he held as a freshman in 2012, when he was 9 of 15. Jordan has served as the No. 2 kicker the past two years, but may be due for a promotion.

4. Which freshman will make the biggest impact in his first Red River Shootout?

There are several candidates. It’s difficult to see Texas winning without a big game from QB Jerrod Heard, who has struggled the past two weeks. LB Malik Jefferson has been quiet after a loud introduction against Notre Dame and Rice. CB Holton Hill has been playing more and more and will be counted on to slow down Sterling Shepard (20 catches, 321 yards). Maybe WR John Burt will be the recipient of a deep ball or two.

Texas vs. Oklahoma: The Eyes of Texas will be upon whom?