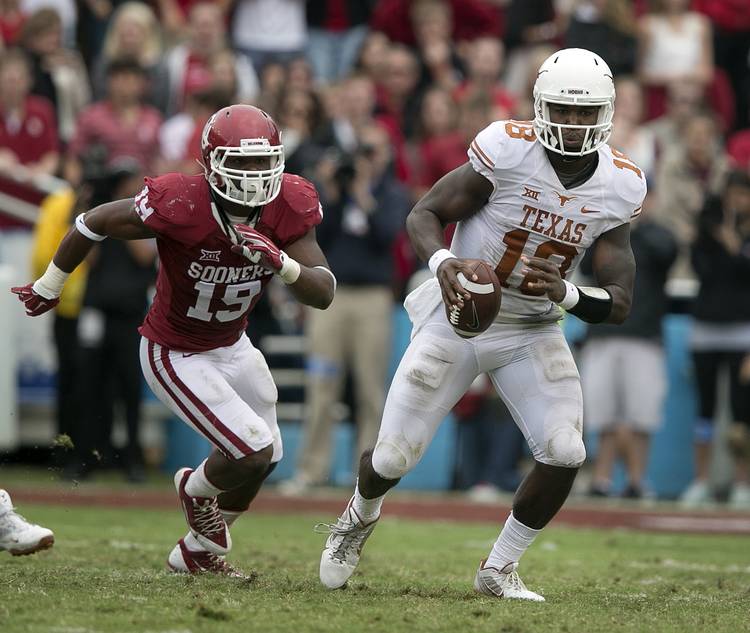 Texas's Tyrone Swoopes runs the ball past OU's Eric Striker during the second half at the Red River Rivalry at the Cotton Bowl in Dallas, Tx., on Saturday, October 11, 2014. OU beat Texas 31-26. DEBORAH CANNON / AMERICAN-STATESMAN

On Saturday against Oklahoma, the eyes of Texas will be upon …

Perine, of Hendrickson, is off to a slow start, possibly because of Mayfield’s emergence in Lincoln Riley’s new Air Raid attack and because of an inexperienced line. Perine has a single 100-yard game (152 yards, against Tulsa) and has not reached 80 yards in any other game. This from a player who totaled 1,713 yards and 21 TDs en route to being named the Big 12’s freshman of the year. Last year against Texas, he ran for 62 yards and a fourth quarter touchdown.

Striker was a third-team All American last year after recording nine sacks and 17 tackles for loss. One of those sacks and two of those TFLs came in a 31-26 win over Texas. Striker is the definition of reliable, having started all 30 games the past two-plus seasons. Expect him to spy on Jerrod Heard, much the same way Oklahoma State and TCU used a spy against Texas’ elusive quarterback.