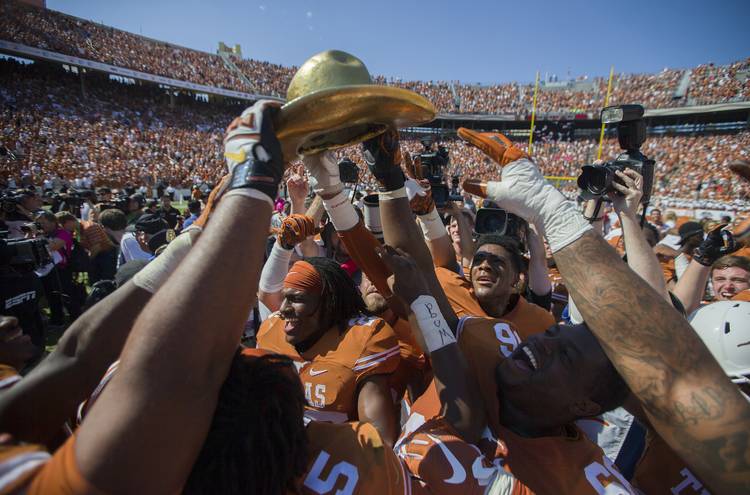 DALLAS — During the buildup to the Red River Showdown, Texas play-caller Jay Norvell downplayed his wanting to stick it to the school that had fired him in the offseason.

Was it gratifying, coach?

How could it not be?

Norvell oversaw a creative gameplan that netted 313 rushing yards and averaged 5.4 yards per carry, and finally saw Texas establish its identity on the ground. He deserves kudos for his use of backup quarterback Tyrone Swoopes, who came off the bench and scored touchdowns running and passing, and also for D’Onta Foreman’s 81-yard run on the final play of the third quarter. It came on a sprint draw, something Norvell may have picked up at OU from former Sooners offensive coordinator Kevin Wilson. Trying to catch OU being overly aggressive, Norvell dialed up the draw several times throughout the day, and Foreman hit a home run when cut under the pursuit for the longest non-touchdown run by a Longhorn since Earl Campbell’s 83-yarder against North Texas in 1976.

Norvell was asked where the win ranks for him personally.

“It’s one of the best,” he said. “It’s by far one of the best. Just the fact that nobody gave us a chance, that our kids had their backs against the wall. They came up and played with so much confidence. Very much like the Alabama game when I was at OU (Sugar Bowl, 2013 season).

The breakdown in carries between Foreman and Johnathan Gray has been a hot issue, and on Saturday it skewed heavily toward Gray, who had 22 to Foreman’s nine. Gray (76 yards) was key before halftime when the offense advanced incrementally and never had to give the ball up.

Mayfield struggles: OU quarterback Baker Mayfield (Lake Travis) flashed horns down as he led the Sooners onto the field.

Whether his slight got back to the Longhorns’ defense is not clear, but Mayfield certainly paid for it. He was sacked six times and was constantly harassed by blitzes coming from everywhere.

“It’s not like they were outmanning us,” Mayfield said. “They were bringing five-man pressures each time. … They decided their mix-up this week was their corner. Early on they got us.”

Mayfield was 20 of 28 for 211 yards and hit only one deep ball, a 50-yarder to Sterling Shepard when Duke Thomas bit on a double-move. Sacks were registered by Malik Jefferson (two), Poona Ford (1.5), and Naashon Hughes (0.5). Paul Boyette and Hassan Ridgway had one apiece.

Short yards: Attendance was announced at 91,546. … Strong is now 2-8 against ranked opponents as Texas’ coach. … Norvell revealed that left tackle Connor Williams is playing hurt and that left guard Sedrick Flowers “has been playing on one leg for three weeks.” The bye week comes at a good time. … Freshman safety DeShon Elliott made his debut and recorded a tackle. He sat out most of camp with an injury.

Texas 24, Oklahoma 17: Horns have plenty to tweet about now

Texas rides Swoopes — its 18 Wheeler — to upset win over Oklahoma