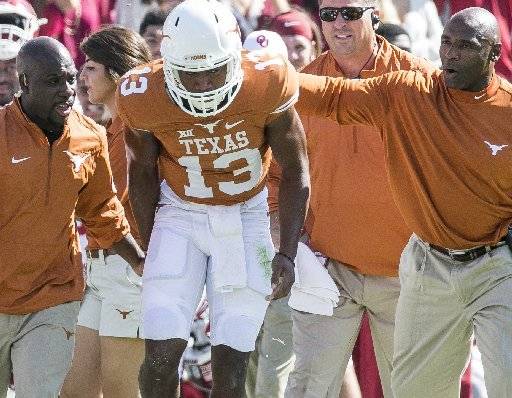 DID BOB STOOPS SHOW MERCY ON TEXAS AND CHARLIE STRONG?

Did it matter? The bigger question is whether Strong showed mercy on Stoops and Oklahoma. Perhaps so, at least at the end when Texas opted to kill the clock rather than go for another score. The Sooners, who have put up 63, 65, 55 and 63 points on Texas over the last 15 years of this series, were stifled all day long. And to think, they were 17-point favorites heading into Saturday.

DID D’ONTA FOREMAN CONTINUE TO TAKE CARRIES AWAY FROM JOHNATHAN GRAY?

No. But … Gray had more carries Saturday (22 vs. 9), but it was Foreman who stole the show anyway. He had a 100-yard game for the second week in a row, highlighted by that giant 81-yard run to end the third quarter. Only 10 Longhorns in school history have produced a longer run. Gray finished with 76 yards on his 22 carries, an average of 3.5 yards a shot. Foreman had 117 yards on only nine carries, his 13-yard average helped by that long gainer.

Nick Rose. Charlie Strong last Monday said the team’s kicking duties were being opened up to competition, but it was Rose, not Nick Jordan, who got the call. Rose certainly has started the season slowly (4 of 7 heading into Saturday), but was 1 for 1 against the Sooners with no kickoff or extra point issues.

WHICH FRESHMAN MADE THE BIGGEST IMPACT IN HIS FIRST RED RIVER SHOOTOUT?

Jerrod Heard. He was pretty quiet as a passer (8 of 11, 53 yards and one touchdown), but was very effective running the ball (21 carries, 115 yards). Malik Jefferson (two sacks) made some key plays and Holton Hill tied for second on the team in tackles, but Heard’s electricity was the big difference.

Texas vs. Oklahoma: Third and Longhorns