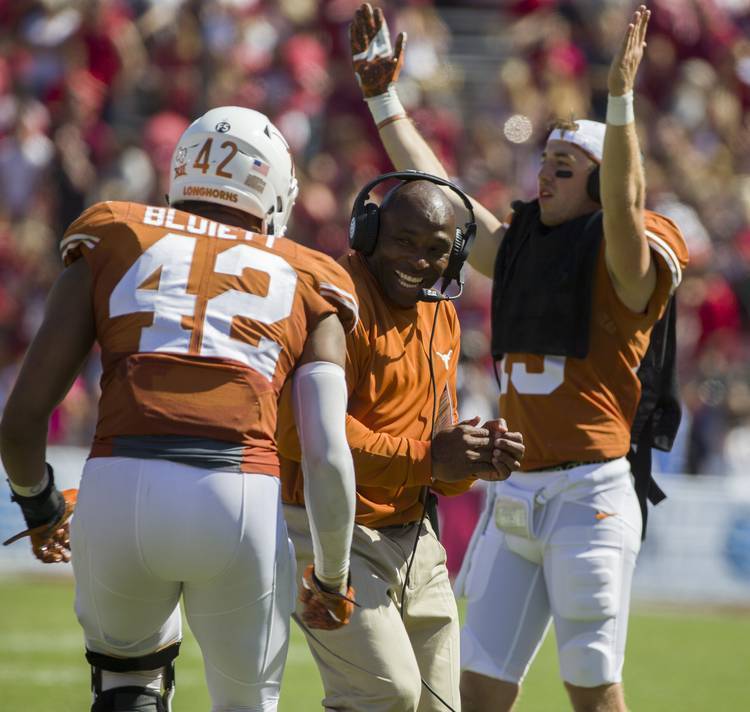 WHY TEXAS (2-4, 1-2) WON: Because this is a rivalry game, and in rivalry games, it doesn’t matter whether you’re 4-0 or 1-4. Because the Longhorns showed up to play and gave great effort in all three phases of the game — just like Charlie Strong told us last Monday that they would. Because the defensive line had its best game of the season, stuffing OU running backs Samaje Perine and Joe Mixon and disrupting OU’s passing game, with six sacks of Baker Mayfield. Because Jerrod Heard was electric again, and because D’Onta Foreman rushed for 100 yards again, and because Marcus Johnson obviously loves this game. And because rushing offense, total offense, the turnover battle, sacks and time of possession all trended Texas’ way.

WHY OKLAHOMA (4-1, 1-1) LOST: The Sooners certainly looked like they were ready for this game, showing great energy just before kickoff, but meandered their way through a first half that yielded only a field goal. Mayfield looked more like the quarterback Texas saw in the 2013 Thanksgiving win over Texas Tech than the one who led Oklahoma to its 4-0 season start. Not having Perine and Mixon there to move the chains was compounded by OU’s inability to test Texas’ young secondary. The Sooners didn’t flash much explosiveness, beyond a 50-yard pass play to Sterling Shepard. And in the pivotal fourth quarter, it was Texas’ defense, not Oklahoma’s, that made the big plays.

THE EYES OF TEXAS: … were on three specific Sooners — Mayfield, who had thrown for at least three touchdowns in all four of OU’s games; Perine, last year’s Big 12 freshman of the year; and linebacker Eric Striker, a third-team All-American last year. How’d they do? Mayfield was 20 of 28 for 211 yards and a TD, but was sacked six times. Perine was held to 36 yards on 10 carries, but did score once. Striker had only four tackles, but two of them were sacks.

Defense — Malik Jefferson matched Striker sack for sack (2), very nearly had a third, and provided pressure throughout the day.

Cheers …
(1) Tyrone Swoopes: Is it just us, or does Swoopes look like he’s having more fun in his current role as short-yard specialist than starting quarterback?
(2) Charlie Strong: Texas’ embattled coach had to have this win, especially after stating last Monday that this game would be the start of the great turnaround.
(3) D’Onta Foreman: Another game, another 100-yard day for the sophomore running back. Is it time to make him the primary tailback?

Jeers …
(1) Baker Mayfield: His across-the-field run flashing the Horns Down toward UT’s side of the stadium wasn’t backed up on the scoreboard.
(2) The play-calling: After jumping out to a 14-0 lead and whipping the crowd into a frenzy, Texas went conservative in the second and third quarters.
(3) Injuries: No Daje Johnson, no Kent Perkins, no Bevo. Maybe this off week — even with the possible cooling of momentum — is coming at a good time.

Texcetera: The 100-yard rushing games by Heard and Foreman were the first by two Horns in the same game since the 2013 Thanksgiving win over Texas Tech. … The six sacks were the most for Texas since a seven-sack game last year against Oklahoma State. … The Sooners averaged only 1.8 yards per carry; Texas was surrendering 4.4 yards per carry heading into Saturday. … The Sooners managed only 15 yards in the first quarter and 85 in the first half. … The last Longhorn to post back-to-back 100-yard rushing games was Malcolm Brown (2013) when he had three straight to end the season. … Marcus Johnson’s three career games vs. OU — 12 catches, 187 yards, two touchdowns. … A game of firsts: Johnson caught his first TD of the season, Caleb Bluiett caught the first TD of his career, and Kirk Johnson had his first career fumble recovery.

On deck: Rest. The Longhorns have a much-needed off week. Next game: At home vs. Kansas State, Oct. 24.