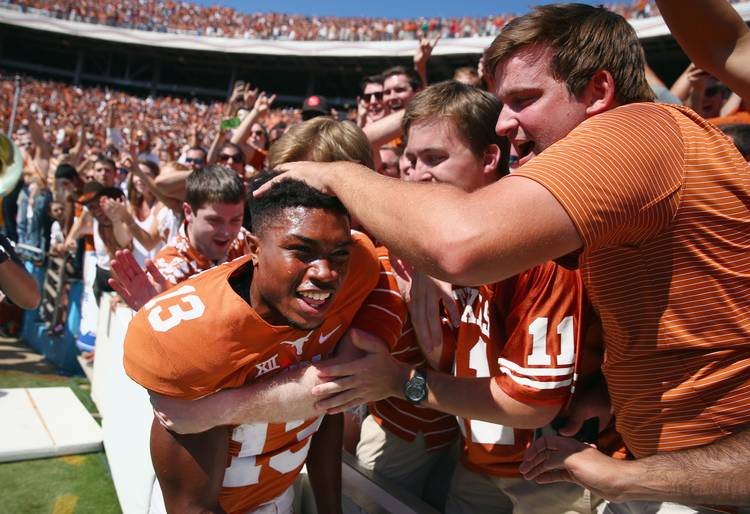 Texas quarterback Jerrod Heard of the Texas Longhorns celebrates with fans after beating the Oklahoma Sooners 24-17 during the AT&T Red River Showdown at the Cotton Bowl on October 10, 2015 in Dallas, Texas. (Photo by Tom Pennington/Getty Images)

The best part of last Saturday’s win over Oklahoma may have been the post-game celebration. When the Longhorns hoisted coach Charlie Strong on the field, it was a clear sign how much they like the man in charge.

Now, they need to win more games for him and themselves.

“We all love coach Strong, love him as a coach and love him as a mentor,” defensive end Naashon Hughes said. “For us to work hard and show what coach Strong has been instilling in us since the first day he came here, that’s like icing on the cake for us.”

If that’s indeed the case, the Longhorns’ goals the second half of the season should be easy. Texas (2-4 overall, 1-2 in Big 12) needs to win at least four of its final six to become bowl eligible.

In a normal year under regular circumstances, that would be an embarrassing goal for Texas. Just make a bowl game? This is no normal year after starting 1-4, which includes two heart-breakers against California and Oklahoma State.

For that to happen, everyone inside the football complex needs to play and coach better. The odds will actually be in UT’s favor, considering the schedule. Certain players must elevate their performance, or Texas risks finishing with a losing record a second straight year.

1. QB Jerrod Heard: The coaches will likely stick with the run-oriented, zone-read offense utilized against the Sooners. But at some point, Heard will have to win a game with his arm. He’s completed 57.5 percent of his passes for 714 yards. Fans want to see “the Juice” turned loose and run wild. But teams will use linebacker spies to keep him corralled.

2. DT Hassan Ridgeway: Nicknamed the “Green Mile,” Ridgeway had a slow start this season because of a back injury. But he was fantastic against Oklahoma State, and the Cowboys managed just 103 yards. Ridgeway stuffed the middle against Oklahoma, helping UT win on first and second down. He’s got to keep plugging away.

3. LB Malik Jefferson: The freshman finally had a breakout statistical day against OU with six tackles and two sacks. He’s clearly more comfortable playing on the edges than in the middle. Jefferson is viewed as the de facto freshmen leader. He speaks for the group, and recruits are watching how he performs. If Jefferson excels, future recruits will believe they can, too.

4. (tie) LT Connor Williams, RG Patrick Vahe: These two freshmen may be forever tied together since starting from day one. Veterans Sed Flowers, Taylor Doyle and Kent Perkins can show them the ropes. But, like Jefferson, UT needs both of these youngsters to play well for recruiting purposes. How best to judge? Watching the rushing totals.

5. RB D’Onta Foreman: Speaking of running statistics, Foreman averages 6.2 yards per carry compared to Johnathan Gray’s 3.7. The sophomore is a bruiser with a knack for falling forward. Foreman’s had 11 carries for 79 yards from inside Texas’ own 20-yard line. A 12th carry went for 81 yards against OU. He should be UT’s lead running threat.

6. DE Naashon Hughes: Halfway through the season, Hughes is fourth on the team with 28 tackles. He’s also got 1.5 sacks and three quarterback pressures. Those are just OK numbers. Hughes has proven himself to be UT’s top threat at defensive end, and teams can scheme to run toward the weaker side. Can he create more havoc?

7. WR Daje Johnson: Suffering a concussion against TCU was plain bad luck. Johnson got sandwiched by two tacklers on UT’s second offensive play and essentially missed two games. He should be a prime feature on jet sweeps in the coming weeks. Johnson bragged about having better hands in August. It’s time to see him catch passes in the open field.

8. CB Duke Thomas: UT fans are excited about freshmen Holton Hill, Kris Boyd and Davante Davis, and for good reason. Thomas rarely leaves the field, though. It’s easy to nitpick and downgrade Thomas’ overall performance against OU for allowing a 50-yard completion on a pump-and-go. But his pressure on corner blitzes made a huge difference.

9. K Nick Rose: How many UT fans were holding their breath on Rose’s 27-yarder last week? He drilled it, but many will never forgive the missed extra-point attempt against Cal. Rose is 5-for-8 on field goals so far this season. All Strong cares about is Rose hitting from 40 yards and in. There will be some huge opportunities ahead.

10. QB Tyrone Swoopes: The short-yardage “18 Wheeler” package is the perfect fit for a player who could have mailed it in after losing the starting quarterback job. Now, Swoopes is fully engaged and plays a critical role on third-and-short. The pop pass was a nice change of pace on the goal line last week, too. Swoopes will do something huge in the weeks ahead. Bank on it.

Longhorns now looking up as season’s second half begins