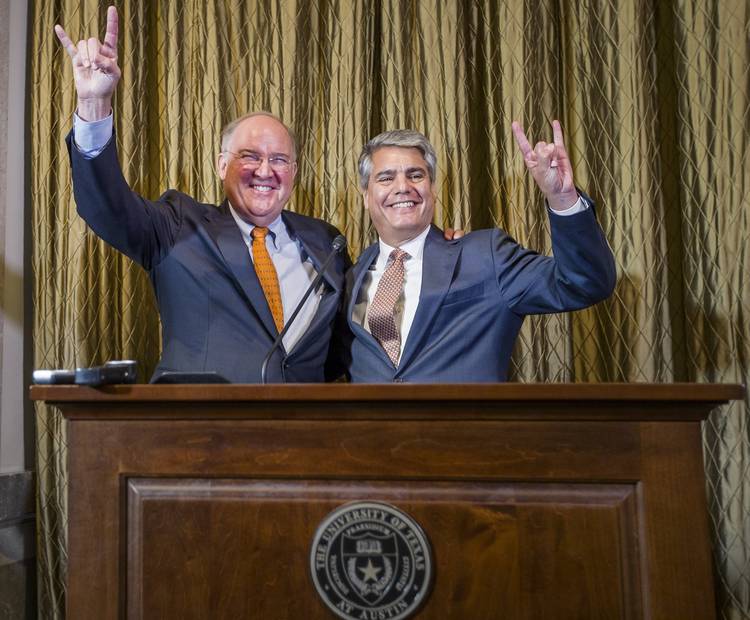 Through three weeks as Texas’ interim athletic director, Mike Perrin was beginning to look like a black cat.

The football team lost on late-game miscues against Cal and Oklahoma State, and was annihilated at TCU.

So Perrin was understandably ecstatic after a surprise win over Oklahoma on Oct. 10.

“Charlie (Strong) was the happiest about it, but I was No. 2,” Perrin said.

On Sunday, Perrin spoke at The Texas Tribune Festival at the Student Activity Center where he gushed about Strong, the second-year coach whom some pundits predict won’t lead the Longhorns back to national prominence.

But Perrin’s opinion matters most — at least for as long as he remains athletic director — and he says he is squarely in Strong’s corner.

“I remain convinced Charlie Strong is the man to lead our football program,” Perrin said.

Perrin said he believes Strong “did a remarkable job last year” considering quarterback David Ash was lost for the season before the second game because of concussions. This season, with freshmen sprinkled all over Strong’s depth chart, Perrin said he anticipates a better product in the second half of the season.

“I expect the second half to be a continued phase of improvement,” Perrin said.

Perrin touched on several topics during the one-hour discussion:

Longhorns now looking up as season’s second half begins